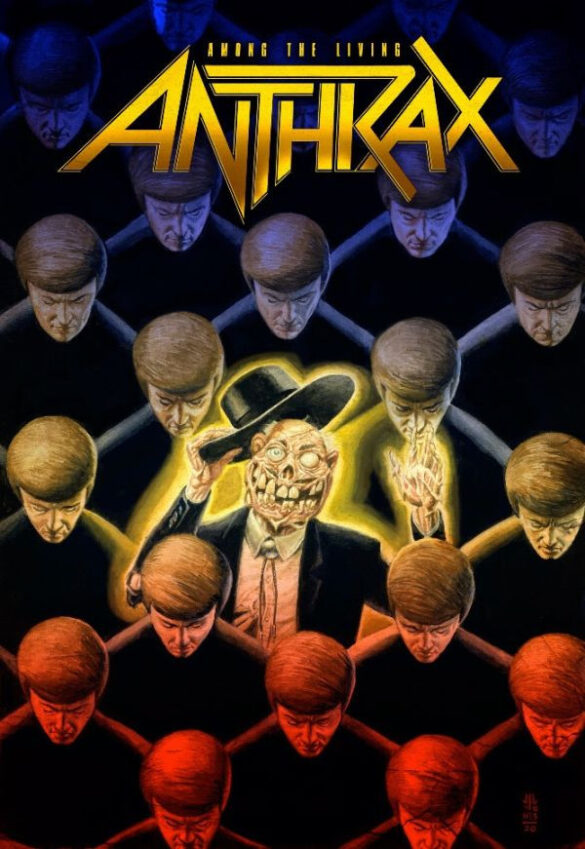 There is a new kid on the comic block and his name is Z2.  This publishing group are building a name for themselves with doing a series of really cool Metal/Hard Rock comic/graphic novel cross-over projects. This is the first one I’ve had a chance to read and review.

As most of our readers know, Anthrax has always embraced pop-culture, movies comics etc and incorporated ideas and themes into their music. 2021 is the 40th anniversary of the band and in their classic style they decided to do something way more unique and original than just a double or triple ‘Greatest Hits’ CD.  The band, in conjunction with Z2 has produced a tribute as it were to Anthrax’s perhaps most iconic album AMONG THE LIVING.

The concept is to have a comic for each song on the album and they have compiled into a great looking graphic novel.  This book is very decent, nice paper, good colour, nice layout and design and it loaded with extra features.  We get an introduction from Joey Belladonna, (I was expecting Ian as he seems to be the comic buy), extra artwork and sketches and the re-introduction of their infamous ‘not’ man character.  As a side note; I actually had a ‘not’ man toy and I really wish I still had it to this day.  What I enjoyed is that the ‘not’ man has been upgraded into a new type of character. The ‘not’ man has been about as close to a mascot that Anthrax has ever had and maybe this evil-modernization might put that over the top. He get’s his own introductory story and then acts as a host, sort of like the ‘The Crypt-Keeper’ would introduce each vignette/story. It is a neat concept.

As for each story, there is a load of creative talent behind it’s creation. They also bring some Anthrax buddies (Corey Taylor, Brian Posehn, Rob Zombie) and just about every member of the band has their fingers on this in some form, making it about as official and endorsed as you can get.

Some stories are a bit more faithful to the lyrics, some stretch the concept into more original territory, but each one is excellent in it’s own way. Overall (mostly) the themes are dark, lots of violence, not too much sex, plot-twists, turns and betrayals. It would be really hard to explain/describe each story and that would kind of defeat the purpose, this is something you need to read yourself.  The opening story is loaded with sight gags, and in-jokes, others are more serious. Scott Ian finally gets to write a Judge Dredd story  (‘I Am The Law’) and he does a pretty damn good job too but I knew he would because he is too much of a true fan to drokk it up.  ‘Imitation Of Life’ and is one of the most fundamentally screwed up things I have ever seen in my life, mixing Invaders From Mars, baseball, Golden Girls, Star Wars, Magnum P.I. (and much more) into this big purple, barf-bag of glory. I can’t even begin to describe it.

There are lot of Metal/comic cross-overs out there and I’ve reviewed a good chunk of them; Kiss, Alice Cooper, GWAR, Megadeth, Slayer, Hammerfall, Children Of Bodom, Thor, Iron Maiden etc, but this one is way up there in terms of quality, execution and presentation. That fact combined with the fact that AMONG THE LIVING still ranks as my favourite Anthrax album makes this a total winner!   Watch for other Z2 titles including Dio, King Diamond, and …BabyMetal?! Hell yeah!