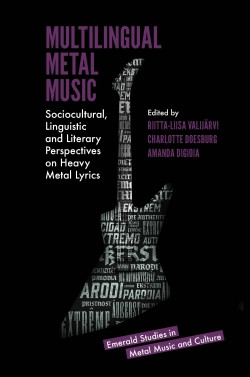 The Emerald Studies In Metal Music and Culture is the pre-eminent collection of academic publications about Heavy Metal.  It is their niche and there are now seven titles in the series and I have no doubt more to come.  I have reviewed the previous six titles on this site if you are keen to read those reviews.

Arriving in early 2021 MULTILINGUAL METAL MUSIC:SOCIOCULTURAL, LINGUISTIC AND LITERARY PERSPECTIVES ON HEAVY METAL LYRICS is a nicely appointed hard cover that runs just under 300 pages.   In terms of features it has your standard index, citations, acknowledgements, contributor biographies and the introduction penned by the editors.  If you are not familiar with the series, this is a collection of essays/papers, in this case fifteen of them.

As I mentioned I have reviewed all of the books of the series and I feel I’m falling into a comfortable but almost necessary habit of presenting my apologies to all the fine authors in advance. My attempts to present any sort of decent analysis of the deep and intelligent work of these scholars will inevitably fall short, so we are reduced to the briefest synopsis of each paper, which still makes for a very long review!  My only recommendation is that this collection will undoubtedly aid in your own research and as a bonus provide some enjoyable reading with many insights.  Let’s get to work!

After a standard but very helpful overview of the content by the editors, we learn that the book is divided into four broad thematic sections; Texts And Intertextuality, National, Cultural and Minority Identity, Processing Oppression, War And Bereavement and a bit of a catch-all section, Local, Global, Authentic and Funny.

Lily Kahn from University College in London gets to be the sharp point of the spear leading us off with a very interesting examination of the Yiddish language in Metal.  She explains that while there are very few Metal bands that use the dying language the influence is felt in many places across Metal and culture in general.

A very specific concept is explored in the next paper entitled Baudelaire and black Metal.  It goes deeper than that when author Ardrey, an expert on Baudelaire, examines how the Russian Black Metal band Cherny Obelisk uses Baudelaire in its work.  This is a deep dive into a single band and poet and the broader Russian appreciation of Baudelaire.

The sub-title of Chapter three says it all: The Interplay of Language and Cultural Identity in The Lyrics of Norwegian Metal bands. Imke Von Helden of Germany provides a conventional but interesting overview of how many bands (Enslaved, Solefald, Wardruna etc) use Norse lyrics to help create their identity.

Chapter Four gets a bit political with a revealing discussion about the Spanish folk hero El Cid and how he has been represented in the lyrics of various Metal bands such as Tierra Santa and Dark Moor.  It seems that some bands use the image of El cid as a bit of a stereotype and other non-Spanish bands might cultural appropriate the idea of El Cid as well.  I learned a lot about El Cid courtesy of Amaranta Saguar Garcia from Oxford.

Lise Vigier of France discusses the minority Swedish-speaking population of Finland and focuses on three main bands, Finntroll, Turisas and Ondfodt who employ Swedish in their lyrics. She does through analysis of frequency of these rare phenomena.

The next paper is one of the most focused. It is a poetic analysis of an obscure song by an obscure Spanish band, Desafio. This initially wasn’t my greatest area of interest but I learned a lot about this specific song and how it relates to an event in the war of Bosnia-Herzegovina. The folks who think that Iron Maiden is the only band that sings about history could learn a lot from Elena-Carolina Hewitt. It ended up being one of my favourites.

Many people seem somehow surprised or amused that a Metalhead can enter politics, let alone be successful i.e., get elected. In just about every thing I read about Chthonic is how Freddy Lim got into politics.   It is an interesting talking point to be sure but in Chapter Seven, Kevin Kai-wen Chiu takes up deeper. In this paper we explore political activism via the lyrics of Crescent Lament and Chthonic.

Danish black Metal band Orm is the focus of Chapter eight and author Tore Tvarno Lind. More specifically we explore topics of suicide and bereavement via the lyrics of Orm. I’m not an Orm fan (yet) so this one left me slightly less enthused.

Chapter Nine was perhaps my favourite paper. Karl Farrugia looks at comedy and humour in the Metal-parody band Nanowar.  He runs thought and explains how regional humour works (or not) and provides many interesting examples from the bands repertoire. I don’t have any Nanowar albums because any band that makes fun of Manowar must be an enemy of Metal, but now I know what Rock Demenziale (a form of surrealism) is!  Who said Metal has no sense of humour?

Peter Pichler a well-known academic takes us on a journey looking at Austrian dialects in German Metal. I’ve read and enjoyed Picher’s work before but as an English speaker (barely) these subtleties were lost on me in this very specific essay where he uses the bands Alkbottle and Varulv as examples.

It is about time Russian Metal titans Aria got some respect and appreciation and Dawn Hazle of Nottingham does just that. In the paper, ‘Delusions of Grandeur? Producing Authentic Metal Music in the Soviet Union’ Dawn. Dawn suggests that because the soviets were at least a decade behind the West in the creation of Rock/Metal (which was imported) that there may be other, more uniquely Russian indicators of authenticity. I really enjoyed this one as well.

With the hype surrounding Baby Metal I’m surprised it took someone this long to tackle them in an academic context.  Lewis F. Kennedy is the first (?) or at very least one of the first to examine this unique and interesting band. Love them or not, now at least we have some context and appreciation of the band.

Chapter 13 looks at dead languages in Metal and how certain bands use bits and pieces from ancient languages (accurate or otherwise) to help create an identity. One prime example that author Simon Trafford of London points to is Eluveitie, with its faux-Gaul as well as Tyr, Enslaved and others.

I was (am a bit of a nerd) and I actually took Latin in High School. Despite it being fundamentally uncool I firmly believe it helped me understand English much gooder.  A collective effort by the Italian hat-trick of Cecchini, Franzini and Passarotti has produced ‘Verba Bestiae:How Latin Conquered Heavy Metal’. The title says is all and the number of examples of Latin in Metal are legion.  These authors do a superb job of synthesizing the widespread phenomena and this stands as one of my top papers in the book.

Slovenian Metal gets the through data/tissue massage with a quantitative analysis in the closing chapter. With only a small sample size of bands to begin with the authors Sporcic and Pesek grind through data pulled from a large Metal database. Ultimately a work in progress they examine the presence of Slovenian mythology and Slavic motifs in the lyrics of these bands.

I think this just might be my favourite collection in the Emerald Series. The reason is two-fold.  First it is quite refreshing to not have to read a bunch of essays about Black Metal from a liberal-feminist perspective. Those have their valued place in academia but there are so many areas of study that are untouched in Metal it is nice to see some authors dig a little deeper instead of going for the proverbial ‘low-hanging fruit’.   Secondly, and perhaps more importantly on a personal level, I’m just more interested in the bands and topic presented; Aria, Baby Metal, Chthonic, Eluveitie, Finntroll, Nanowar, Latin in Metal, Yiddish Metal and much more.  It was just a fun, easy read instead of slogging through the standard ‘heavy’ topics of race, religion, gender, politics and so on.

For a novice / enthusiast like myself this might be the best book to start with if you are starting your own exploration of Metal academia.