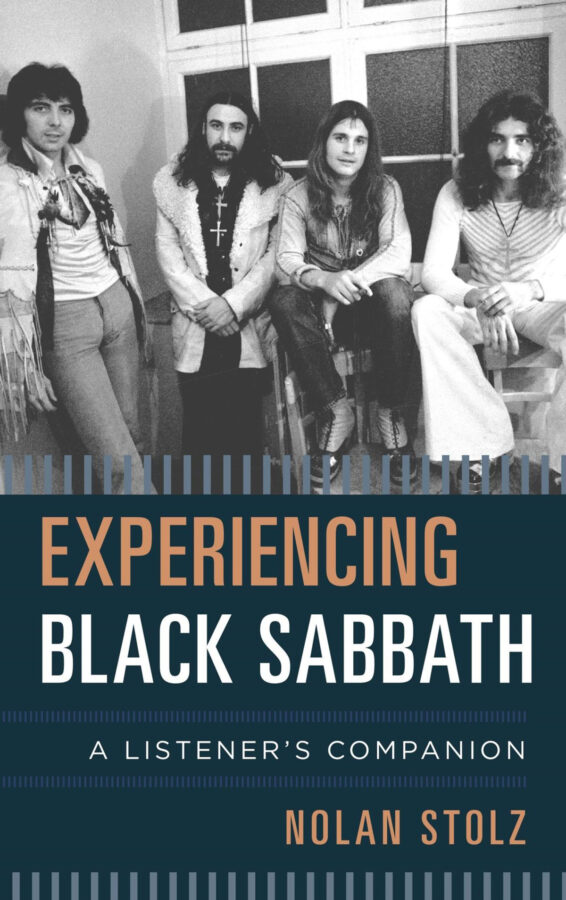 This is the second of two books I reviewed this month that look at the Black Sabbath catalogue and go song-by-song through the band’s discography, the other being Elliot’s book BLACK SABBATH AND OZZY:THE STORIES BEHIND THE SONGS.  Feel free to read that review as well.

There is an interesting book series that I recently became aware of. It is called ‘A Listener’s Companion’ published by Rowman & Littlefield.   The basic idea is that an expert on a band writes a detailed analysis of the music of that artist’s catalogue.  This is not unlike Martin Popoffs ‘song by song’ series.   As of 2021 there seem to be about 40 titles in the series covering all forms of music.  For our purposes at Metal-Rules.com, there are four in the series worth our attention; Led Zeppelin, Black Sabbath, Rush and Alice Cooper. I’m going to get and review the other ones as well. I reviewed Alice Cooper in May and Rush last month in case you are interested in this series.

Stolz’s approach is a bit different from the two other books in this series I have reviewed (Alice Cooper, Rush) in that he really focuses on minute details in the sonic presentation. For me this could have been the death-knell because I do not have formal music training or theory so many of the terminology of music appreciation is not in my vocabulary.  However, Stolz quite wisely I feel aschews the more theory/technical side of the analysis and writes in plain English, in germs the layperson can comprehend.  When there are musical terms, the tri-tone’ for example, he explains it easily so the reader doesn’t get lost in talking about harmonics, Mixolydian modes and diatonic scales.  Writing about music to describe sound is exceedingly difficult but he gives us his very best effort.    He even advises to listen, read, listen again and asks us to ignore our favourite parts to really hear how much is going on in each song.  This is a deep dive.

As we might expect the book follows the album-by-album, song-by-song format from beginning to THE END.  There is a brief introduction and then off to the races for 236 pages.  Music is virtually the sole focus, lyrics are not the focal point by any means.  This is also the one of the negative aspects of the book, there is an almost, dull, mildly antiseptic micro-analysis of musical sounds and forms. How many songs in a row can we stay enthusiastic when the author goes through each song, almost literally, second by second?   Here is an example.  Talking of ‘Zero The Hero’ on page 120 he says,  “ To add interest as the song comes to a close, there is an overdubbed snare drum part that repeats the same five note rhythm of the song title starting at 6:04 and a backward piano from 6:30 to 6:32. These are included on Geoff’s live tapes so they were likely used in live concert. Also there are some bongos of high-pitched congas in the left channel (6:20) and right channel (6:24) and elsewhere. There are two guitar solos in the fade out (one in each channel) and a third solo begins in the center at 7:21.”  Talk about meticulous detail…and the entire book is like this!

To read all of it to be frank, got a bit dull.   However, this can be easily rectified.  If you are a Black Sabbath fan and buy this (which you should) you can read a chapter at a time when you are listening to your next favourite Sabbath record and feel like going for an assisted explanation of what is going on in headphones. Reading it all in one sitting was a bit of a horse-pill to swallow, but that is not the author’s fault, it was my choice to consume in this fashion.

I did really appreciate that Stolz covered ALL of the songs, not just the hits.  He talks a lot of tone, tempo, recording, the execution of the song, sequencing on the albums, technical writer’s royalty systems and publishing rights, it is phenomenally detailed. He even discusses bonus tracks on compilations, live albums, soundtracks even Heaven & Hell. I had forgotten (or maybe never even knew) that there were two versions of the song, ‘Time Machine’ from DEHUMANIZER; the album version and the version that appears on the Wayne’s World film soundtrack. He covers it all!

I can’t in all fairness be critical of the excellent work done by Stolz.   EXPERIENCING BLACK SABBATH is incredibly well-done.  It is just, that type of deep musical analysis only holds sway with me for so long. I am the same when I watch a film.  I don’t watch the ‘making of’ bonus features for movies, I like a bit of the mystery and magic to stay intact when I see my movies and the same applies when I hear my Black Sabbath songs.  Now I know more about those songs than maybe I ever needed to but it was worth it.