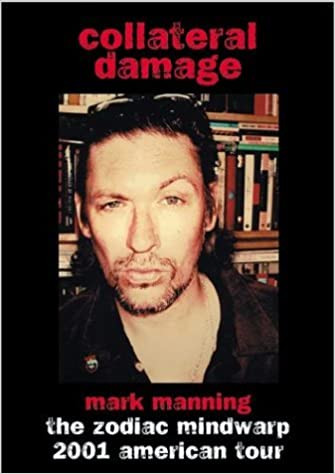 Do you recall Zodiac Mindwarp?  There had a huge amount of press and buzz in the late 80’s and early 90’s when their album TATTOOED LOVE MESSIAH was released.  The band toured North America with Alice Cooper and Guns ‘n’ Roses (not bad!), shot videos (five of them!) kicked ass, raised hell and then sort of dropped off the map, at least in North America.  The band soldiered on churning out another five albums and being relegated to bar status.

I had not followed the band after the first few records, so I was quite surprised to learn that Mark “Zodiac Mindwarp’ Manning had written a book! I stumbled across it in a used bookstore and snatched it with glee. Some quick on-line research revealed that Manning has written five or six other books, almost all of then about his time with the band. I had no idea.

COLLATERAL DAMAGE is a small, semi-independent publication (Creation Books), pocket sized, paper-back.  It was published in 2002 and it is actually his fifth book, I believe. In terms of presentation it is not that well done. It is has large font, is printed slightly off-center and other minor inconsequential layout and design issues but you can tell the 191 page paperback is a cheap print job. There are sixteen, mostly blurry, black and white photos published on glossy paper in the middle.

The sub-title is (in all lower case) ‘the zodiac mind warp american tour diaries’ and features a scruffy looking Mr. Manning as the cover model.   interesting to note, there are different printings.  The title on the cover photo (above) is different than my copy . Apparently, after several albums and even more line-up changes the band undertook a small independent tour of the US.  It was after September 11th, 2001 so I’m assuming they were touring for some sort of reunion tour just before the 2002 album, I AM ROCK (their fifth) and the book being published shortly after.  I use the word ‘assuming’ because Manning forgets to, or maybe even deliberately, does not include that information. It is not much of a ‘tour diary’ when you don’t include the name, dates of location of the show!

COLLATERAL DAMAGE is not very well written. It is vulgar and offensive.  That does not bother me at all. The vulgarity, the debauchery, the sex the drugs and vile humour, that is all quite fine but it is just so poorly presented it lacks impact.  It is clear that Manning is quite clever and funny and badly in need of an editor. These stories have the potential to go down as legendary tour antics on par with the greats but the presentation is so lacking it just comes across as a poorly remembered, stream-of-consciousness, word barf.  Stories about smelling your band mates farts in close quarters after eating multiple cheap chili-dogs have enormous comedy potential…if they are presented and told well.  In this case the raw material is there but comes across as drunken tales, hilarious if you were there…which we were not.

Some readers will find the material objectionable and probably not believable.  The parts about the band engaging in bestiality and the band filming a horrific and racist snuff film with kidnappers in Los Angeles are perhaps grim to read but Manning gives us a little wink at the end where on page 180 he says, “Maybe-just maybe-our stay in the Farmer’s Daughter motel had become one long crack hallucination. You decide.”

Zodiac Mindwarp’s  lies, truth, fiction, hallucination, entertainment, parody and exaggeration all blur into this sordid tale of a decent band of rock survivors doing a crappy tour with other crappy bands in crappy bars in America.  It ain’t pretty and COLATERAL DAMAGE is a morbid curio for die-hard fans or the work of a demented and cynical genius.  I haven’t decided which yet. Probably both.