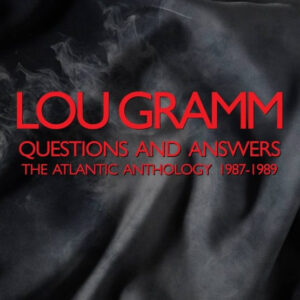 Growing up in the late 70’s and early 80’s  Foreigner was a pretty huge, multi-platinum rock act with lots of hits.  I never actually bought a Foreigner record but they were on the radio all the time so I got familiar with the big songs.  Fast forward a bit to the late 80’s and vocalist Lou Gramm decided he wanted to express himself and he started a solo career.   I did actually buy his two solo albums (on cassette!), READY OR NOT (1987)  and LONG HARD LOOK (1989).  He had a bit of a minor hit with ‘Midnight Blue’ which I always felt was a great song.   Fast forward, yet again to 2020 and the fine folks at Cherry Red saw fit to resurrect this pair of old gems.

QUESTIONS AND ANSWERS repackages the two solo albums and adds a generous bonus disc.  The double fold-out wallet has a pretty dull cover, but Gramm never really established a strong individual identity in his solo work, letting his song-writing and vocals speak for themselves.   Inside we get a 12-page booklet, with liner notes, a bunch of photos, credits and a nice essay by Malcolm Dome.

The solo albums were good melodic Rock / Hard Rock with an AOR flavour. There is a lot of nostalgia for me hearing these CD versions for the first time in probably 15 years. The songs hum along nicely with just enough guitar bite (just barely) to keep this from being too wimpy.
The real treat for the die-hard fans is the bonus disc. It has seven bonus tracks and an interview Gramm did back at the time for a radio station.  The label at the time (Atlantic) really pushed the song ‘Ready Or Not’ as a big potential hit with no less than four versions on this set; the original, the ‘rock’ version, an instrumental version and a dance version.  ‘Midnight Blue’ appears in an extended version as does a bit of a rarity, the track ‘Lost In The Shadows; from the Lost Boys vampire film, which was actually bit a big deal when it came out.

I don’t know how often I’ll listen to the interview again, probably never.   Interviews are quite rare on CD, I’ve got a few over the years but I don’t think I’ve ever listened to them more than once.  The albums will make it into rotation when I’m feeling mellow.  Cherry Red is really doing the rock aficionados a service by making this type of material available again at the budget price with some nice bonuses.