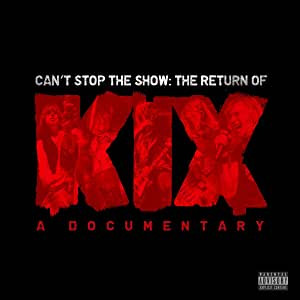 This is one of those annoying releases that suffers from an identity crisis.  Is it a documentary DVD with a bonus live album?  Or is it a Live album with a bonus documentary DVD?  It is packaged as a CD in a jewel case but it is billed as a DVD.  Is it that hard to put a DVD in a DVD case?

Back in 2016 Kix released CAN’T STOP THE SHOW: THE RETURN OF KIX. This was to capitalize on the modest success of their 2014 comeback album ROCK YOUR FACE OFF released after almost two decades of inactivity. This set is billed as a documentary but packaged as a CD. The booklet is pretty neat.  It comes with hype sticker, a regular Kix sticker and the 12-page, full colour booklet had a contribution from each member, plus the usual notes and credits and so forth. The cover art is dull but serviceable.

Working on the assumption that the DVD/documentary is the main attraction, Let’s look at the bonus live album first. It is a brave but flawed live presentation.  It is one of those also annoying live albums that is pulled from three different live dates, two in their old stomping ground of Maryland and a couple of tracks for an American satellite radio station and these were already previously released!  So basically we get a 10 song, 50-minute mix of two concerts that does not flow well. You can tell it was Frankensteined together.  I say it is ‘brave’ because the band includes six songs from ROCK YOUR FACE OFF album and I admire bands that are confident enough in their new material to play lots of it live, when the easy route would be to play the old hits. The sound I great, Whiteman’s stage banter is always fun but I suspect much of it was cut to save space. It is spirited but no match for LIVE, released in 1993.  Speaking of stage banter, one of the bonus clips on the DVD is a montage of Whiteman’s jokes and monologues.

The documentary, which shares the same name as the live album, reminds me of several other sort-of lower budget, independent productions and documentaries produced in-house by Y&T, Quiet Riot and Twisted Sister. In the liner notes it was said that the documentary really evolved from a bunch of Youtube clips that were meant to help/support the album and that really shows.   It was also mentioned that the last round of activity for Kix was a ‘victory lap’ and that is a good way of characterizing it.  The doc is more about the making of the new album and less so a full-blown historical retrospective.  In that sense I was disappointed, I had hoped it was the full Kix story but that is yet to be told.  Maybe there might be another Kix doc that covers the history of the band, but deep down I think the band hasn’t got it in them; time money resources etc.

What we do get is unpretentious, loose and fun. Many interviews, recent live clips and in-studio footage of the band recording the album. It is sort of ‘fly-on-the-wall’ type stuff.  At one point during an interview in one of the members house they stop and make a joke because a toilet flushes in the background!  However, Kix has always been unpretentious and fun, that has always been their charm and one of many keys to their long-standing success.

The doc is loaded with guest stars; members of Extreme, Black And Blue, Halestorm, Wrathchild America, Vixen, Cinderella and more, all who have nothing but praise for the band.  Even Eddie Trunk does an interview from presumably his home, where he looks like he just rolled out of bed to do a zoom call, and in standard Eddie fashion doesn’t talk much about the band but more about how he played them on his radio show, trying to position himself as an early fan.

The main feature is a bit short, only 71 minutes and that includes almost three full live songs so really it runs closer to 65 min. Lastly as bonus features there are some unedited interviews, several videos (but not the Atlantic Years) and the aforementioned montage of Whiteman’s stage banter.

I might have sounded a little harsh in my assessment of this DVD/CD set but I really am delighted to own it.  Kix is a long-time favourite of mine and even if they never do anything again, this puts a nice little feather in their cap.