Due to the historic nature of this release, we have combined our thoughts on the album into one collective review…… 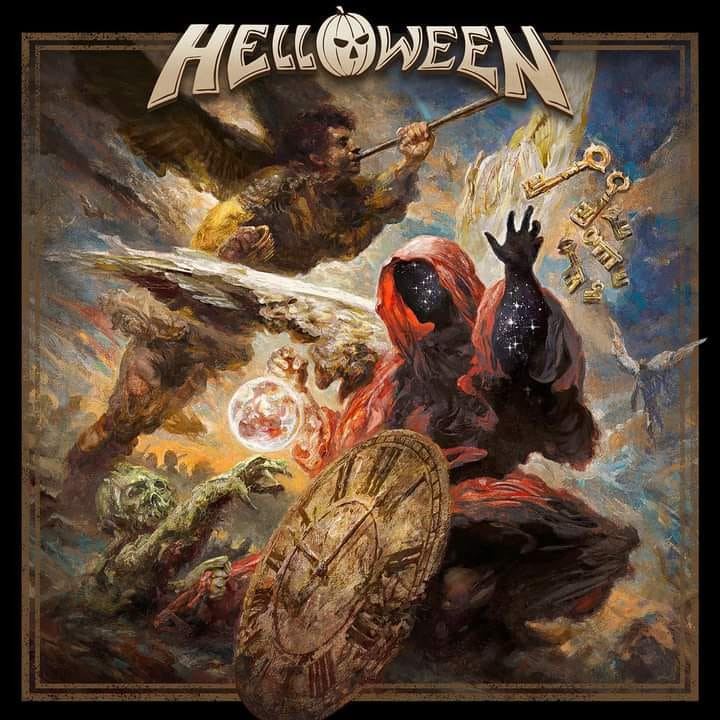 So here we are with the metal event of the year. The anticipation for this day has been rising ever since it was announced that the Pumpkins United line up was making an entire album….my excitement level went through the roof!! This was it…not only was Michael Kiske and Kai Hansen really back in the band but Andi Deris, Sascha Gerstner and Dani Löble are a huge part of this as well. The Deris era, especially once the line up was solidified for the KEEPERS LEGACY album, was a great era of the band. The build up to the release of the first single/video “Skyfall” was well worth it being one of the best songs ever released. The song is a scaled down seven and a half minute version of the full album version, and even “stripped down,” the song was absolutely incredible and took the metal world by storm. If that was just a taste of the album, what are we in store for? It was also announced that the album would be simply titled HELLOWEEN. I thought that to be brilliant choice and the album art just sealed the deal. This is going to be the metal event of the year.

“Out for the Glory” kicks this off and this is exactly what I was expecting. After a brief build up the dual guitars begin to play the melody as the song speeds up. I already have chills thinking about Kai Hansen and Michael Weikath’s dual guitar attack back after all this time. Then another sound that no one ever thought they would hear on a Helloween album again….Michael Kiske’s incredible voice. It is amazing how incredible his voice is after all these years. I thought he sounded amazing on the second Unisonic album but this blows that completely away. Speedy, melodic and an infectious chorus, everything you would want from the opener of not just the Pumpkins United line up, but a cohesive unit. Kai also gets to sing a few bars on this one as well making this the perfect way to open the album. “Fear of the Fallen” follows it up and this song represents the future of Helloween. Deris and Kiske have turned out to be incredible vocal duo. Some of the arrangements they did for the live classics were incredible. It was like they were meant to be in this band together. The vocal arrangements on this song, as well as the rest of the album, are insane. When you expect Kiske, you get Deris. When you expect Deris, it’s Kiske. Then Kai’s voice falls in somewhere from left field , but they make it work brilliantly.

Another brilliant thing about this album is how they have kept a lot of the modern Helloween elements. Hansen’s and Kiske’s return did not create a return to sounds of the 80s. Instead it is like they’re coming back into the band was as an addition not some sort of throwback. Songs like “Best Time” and “Angels” show the Kiske/Deris duo on fire again but Deris shows he can still carry a beast of a Helloween song like “Mass Polution.” This is an all out rocker with an awesome chorus and some killer solos going back and forth. The monster “Robot King” has the vocalists hitting some incredible high notes in some of the best vocals of the album. But it’s the full length version of “Skyfall” that just sends this album over the edge. The single edit is an incredible epic but the full length at 12:11 is just an incredible masterpiece and the perfect way to end the album. Each vocalist has their moment to shine as well as work together to create more of those incredible harmonies. Kai Hansen has a few more vocal moments here, not just because he wrote it, but because it works. The solos are longer than the single edit and there are more vocal parts added in, especially towards the end. Just an absolutely amazing epic song and brilliant way to end the album.

I saw Helloween back in 89 on the Headbanger’s Ball tour when they were touring for KEEPER OF THE SEVEN KEYS PART TWO.  I also saw them again in 2003 and 2004 when they were touring for RABBIT DONT COME EASY…..even being a guest of Michael Weikath and meeting the band at B.B King’s in New York. I’ve always loved Helloween no matter what era. Some of my favorite Helloween albums are from the Deris era. However, I could have never foreseen this. Not only Michael Kiske and Kai Hansen back in Helloween but with the current incarnation still intact. And that is why the album title is brilliant; this is not just a reunion….this IS Helloween how they were meant to be. This is essential!

This is arguably one of the biggest Metal albums of the year. I’m a big Helloween fan as well putting them somewhere in my Top 10 bands of all time. It has been six long years since MY GOD GIVEN RIGHT came out. I personally loved that album and it’s return to the classic sound, despite many others ranking it somewhere in the middle of the pack in terms of catalogue.

HELLOWEEN is unarguably one of the biggest Metal albums of the year. The album has been available for media for a couple of months, the singles were pushed hard and the hype has been pretty intense. All the buzz surrounding the return of Kiske, the two ‘Pumpkins United’ tours, the triple live album (UNITED LIVE IN MADRID, 2019) the anniversary celebrations…. it has all added up to this moment.

They have been milking this reunion thing for almost two years so eventually the band had to come up with the goods. So despite all these factors I managed to avoid everything (I didn’t listen to the singles, read reviews, etc) and remain strangely calm in preparation of enjoying this album the band’s 18thalbum. I wanted to enjoy it in her old-school glory and purity. And I did not want to be disappointed by an exaggerated sense of anticipation. Does HELLOWEEN live up to the hype? Yes.

Long time friend and producer Charlie Bauerfeind handled the production and Dennis Ward, a long-time buddy of Michael Kiske and his post-Helloween projects (Unisonic, Place Vendome) gets a co-production credit. The cover art, well, I think I’m the only person on Planet Metal who doesn’t like it. I’ve never been a fan of Eliran Kantor. I don’t know why so many people like him, his work lacks detail and is always blurry and washed out. The image itself is powerful and fits the Helloween legacy very well so I can’t complain too much.

So everything is in place; a ‘comeback’ album, the three signers, three guitarists, two old members are back, production team intact, the band of brothers riding high so it comes down now to the songs. They had to get down to business, perhaps the only thing missing is the patented Germanic humour with some joke songs and the goofy pumpkin people. HELLOWEEN is as good as anything they have ever done. The songs are epic, fast, soaring, glorious and majestic. There is an intensity and energy present all across the album despite having nothing to prove this late in their career.

To address the oft-mentioned return of Kiske; it is not a make or break factor, Andi Deris has done an utterly magnificent job as the voice of the band for over a quarter of a century and twelve albums. However, I tried really hard not to get swept up in the excitement but man, is it good to hear Kiske back home. It just doesn’t get any better than this. Helloween never went away but Helloween is back, indestructible and out for the glory.

The reunification of the pumpkins is one of the greatest and most important occurrences in heavy metal history. The icing on the pumpkin is the now delivered album. Does it stand up to the hype and waiting? Is it as magical as their reunited live shows have been? Is it the best album of 2021? Yes and Yes and perhaps!! Even though I just got the album and have only had time to listen to it a handful of times, I feel confident in saying this is their best album since the Keeper Pt. 1 and 2 era. I have said that before about albums they released since the keeper albums, as I’ve loved the band in all its forms. They really have outdone themselves! How could they not with vocals from Deris and Kiske, and some from Kai. My current fav tracks on the album are: Skyfall, Indestructible, and Fear of the Fallen. But there’s not a bad on song here. Perhaps with some time, I’ll pick other favs. I just hope I’m able to see a bunch of these played live here in Canada.

There’s something very familiar about ‘Helloween’. HELLOWEEN’s ability to write catchy melodies has not diminished and they have remained true to their heritage. The songs embrace you like an old friend you haven’t seen for decades. I hear flavours of this and bits of that from HELLOWEEN’s back catalogue.

The shared vocals by Kiske, Deris and Hansen combine seamlessly to provide depth as well as contrast and you can distinguish each singer’s contribution, especially Kiske’s held vibrato high notes.

I have to mention as a big AVANTASIA fan that Skyfall has a very distinctive AVANTASIA writing style to it and the similarity isn’t just Kiske’s vocals.

Three vocalists and three guitarists in one band is usually… well, it’s never happened because everyone would kill each other on touring, but HELLOWEEN made it work during the Pumpkins United tour. Generations of HELLOWEEN combined for a new studio album was a brilliant undertaking for fans salivating for more. If you’re a HELLOWEEN fan that doesn’t like this album then there’s something wrong with you. 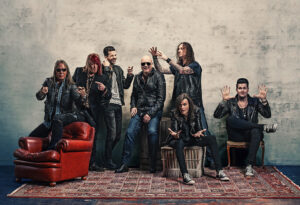