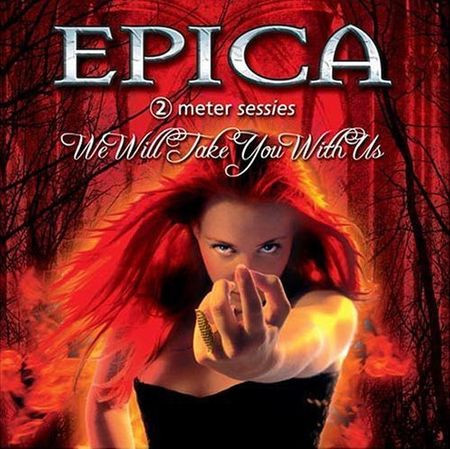 I’m on a bit of an Epica kick since the new album came out earlier this year.  This was a nice little find I came across in a pawn-shop of all places.  I had seen the European version of this DVD/CD set a number of times but passed on purchasing it because the PAL format would not play in my DVD player.  This is the Mexican pressing in NTSC so I finally get to see this DVD after all these years.

WE WILL TAKE YOU WITH US is packaged in a soft case DVD which is not my preference but it will have to do.   Amazingly the DVD still had the promotional flyers/postcards and booklet in perfect condition, usually that stuff disappears or is damaged.  The striking cover art really stands out.  The DVD comes with a bonus CD of the same sessions.

Writing from a North American perspective, I did not really know what the 2 meter sessions were until I read more about it.  Essentially it is a popular radio/TV broadcast in the Netherlands that was founded back in 1987.  Think of it as their version of MTV unplugged. Dozens and dozens of artists, both domestic and international have participated in the sessions building it a global reputation.

Back in 2003 Epica released their debut and it was very well received so the band was a natural fit and good candidate for these esteemed sessions. The sessions were recorded on March 27th, 2004 and produced a DVD, CD and combo set, which is the one I’m reviewing.  It might seem a bit premature for a band to have a sort-of informal live album as their second release but Epica is by no means the first band to do so.

By it’s nature, the sessions are stripped down and it is just footage of the band performing ‘live-in-the-studio’ with a bunch of guests.  The footage is mostly hand-held camera stuff and fairly low-budget but a neat intimate look at the artists at work.   They are just sort of sitting round palying, not much action to speak of, just talent.  The new band didn’t have a ton of material yet so the run time of the official part of the program is short at 52 minutes but they do add a bunch of bonus material.   After the concert there is an acoustic session a highlight being Simone’s version of Memory from the musical Cats. She has a beautiful voice.

Additional material include two videos one for each of the first two singles,  ‘The Phantom Agony’ and one for the ballad ‘Feint’.  Each one of those videos has a bout a 10-minute ‘making of’ mini-feature.   There is also just some random fooling around in the studio stuff called ‘The Voices of The Phantom Agony’.   Lastly it is topped off with features that now seem a bit outdated, (Slide-show, links to a web-site, discography) but back then those were valuable features.  When you add it all up it is actually two hours long.

WE WILL TAKE YOU WITH US is a really interesting and intimate look at this young band who were just starting out, (they look so young!) and for fans an important documentation of the bands early days.