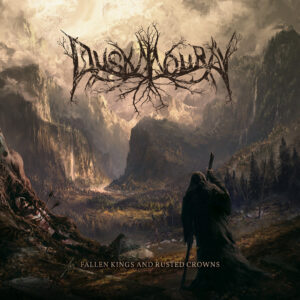 My favorite epic folk metal band from this side of the pond is quite assuredly Duskmourn. Both gentlemen involved with the project live in the Pocono Mountains on the Eastern PA/Western NJ border. My review of their sophomore release says the band like to described their music as wanting to take the listener into a, “world of ancient tales and nature bound journeys.” They have never waivered from that formula. I first heard their brand of folk metal on their debut, LEGENDS. I immediately described them as the “Moonsorrow of the States.” Fitting but as I have gone on to break down this band’s music, not completely accurate because they are much more than a band trying to sound like this band or that…..they truly have their own sound. Their third album, FALLEN KINGS AND RUSTED CROWNS, shows a very focused album that does pay homage to their influences while still keeping the trademark Duskmourn sound that they perfected on their debut.

The title track kicks it off and this is the perfect example of the “Duskmourn sound.” Their signature melodic leads hit you first thing, although this one seems to take the melody in an almost Eastern direction, almost reminding me of modern Amorphis in places. They slow it down to acoustic guitars, a mouth harp, and what sounds like Uilleann Pipes to add that sweet melody. Another thing that has always impressed me with this band is their ability to make each song an epic track, whether 5 minutes or fourteen. Unlike last album, there are no songs on here over seven and a half minutes but they still have that ability to take make each song as epic and triumphant as the last. “The Sleeping Tide’ contains that Moonsorrow influence I was talking about in certain riffs but there is something in the melodies that they create that sets them apart from the pack. The single they released prior to the album, “Deathless,” is the long song on the album and this is what I meant about their signature epic sound. The song is huge and the execution is brilliant. The way the use their tremolo leads and the melodies created is what drew me to the band to begin with. This actually reminds me of something that could have been on the sophomore, OF SHADOW AND FLAME.

Another thing that sets this band apart from some others is their consistency in songwriting. With all three of their albums, each song has a place on the album as well as how it stands alone. As I always say where a song’s position is on an album can make a huge difference. Duskmourn had the ability to position each song on the album in such a way that once you start the album, there is no skipping around….you have to listen to it all the way through. However, that does not mean there are not stand outs; although that is hard on an album where each song is truly special. “In The Chamber of Incantation” is that song for me. The majority of the song is all Duskmourn but the intro and outro riffs are all Valfar! I even commented on the band’s Facebook page and they said they did it intentionally because….well because Sognametal Rules, that’s why! They mentioned Windir and Vreid being huge influences for them and it shows, not just in this song but in their whole approach. “The Harbinger” also needs mentioned because it is the album closer and another stand out track. The main riff and the melodies hit you immediately. This is also a huge song with many layers with that signature Duskmourn melody closing it all out with a short but tasty melodic solo.

Epic folk metal is one of my favorite sub genres and Duskmourn knows how to pull it off like no other. Each album is created to take you on that musical journey to that world of ancient tales and nature bound journeys. The fact that this album even exists is something to be said as well. The pandemic has made a lot of musicians become creative in how they produce music. This album was completely crowdfunded and that is no easy feat; but it shows their determination to have their music heard. You need this album in your life!

Track Listing
1. Fallen Kings and Rusted Crowns
2. The Sleeping Tide
3. Deathless
4. Blood of the Forest
5. Mountain Heart
6. Among the Ruins
7. In the Chamber of Incantation
8. The Harbinger