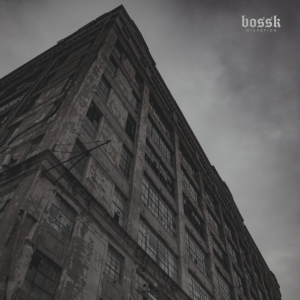 If you’re looking for some light, good-time party anthems to rock out to this summer after being stuck in relative isolation for the last fucking year, you should probably steer clear of the second full length from English post-metallers Bossk. Though quite thunderous and turbulent when it wants to be, Migration is also weighty, bleak and, well, not a hell of a lot of fun in the literal sense of the word.

“Time in silence, taking over me,” offers guest vocalist Josh McKeown from Palm Reader on the contemplative “HTV-3” during a rare occasion where words are actually uttered on the album, which is definitely one where the music does most of the talking. “Summertime Girls” this is not.

Indeed, Migration seems more focused on mood, atmosphere and jarring contrasts where serene, meditative passages of relative quiet morph into forboding gloom or erupt in a sudden crush of cascading guitars and heaving rhythms. The vocals, when they appear, on the imposing “Menhir” and the soft/loud hybrid “HTV-3” mostly come via guests – Cult Of Luna’s shouty frontman Johannes Persson on “Menhir” and the singy/screamy McKeown on “HTV-3” – and serve more as accents to fill the cracks in between or lend emphasis. Bossk’s own frontman Sam Marsh is used sparingly, if at all, here, perhaps providing harmonies and trading off with McKeown.

Yet despite de-emphasizing vocals/lyrics – there are essentially about a dozen lines for the entire album – Migration tells a surprisingly compelling sonic story. The shifting moods, ample spaces and sudden jolts give the album a cinematic, soundtrack-like flair with a narrative thread that transcends mere words and ties the vastly different elements together. It creates a series of movements that feel connected, intertwined and constructed with purpose.

“White Stork” opens the album in a somber wash of feedbacky guitar, pulsing synths and other noise played at a limited volume that slowly builds. The crushing “Menhir” and the sporadically explosive “HTV-3” are contrasted by the airy ambience of “Iter” and “Kibo,” which adds some very sparse guitar strains. “Unberth” follows “White Stork’s” lead with its achingly slow progression from post-rock desolation to throbby, clangorous industrialized electronica.

The nine-plus minute “Lira” brings things to a suitably epic close by bringing back the bombast of “Menhir” and “HTV-3,” but spreading it out and letting things build and retreat, which adds to the drama. It saves some of the album’s heaviest moments for right near the end, with some truly titanic riffs, but forgoes the big finish, instead letting things simply drift off just as they slowly drifted in on “White Stork.”

Migration is heady fare at a time when I think most of us are looking more for escapism. But it is certainly a compelling work, even it does require a bit of patience. It might lack for fleeting thrills, but it is a sonic journey that when taken in its entirety will more than satisfy in the end.