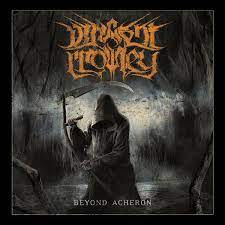 It takes a particular sense of commitment and conviction to retire a well established band with 30 years of history. But Vincent Crowley did just that in 2019, sounding the death knell and finally laying the mighty Acheron to rest seemingly for the last time…In the ensuing years, Crowley has stretched his creative legs with the so-so multi-national war machine Infidel Reich, but has now come around to releasing his first proper solo album, the aptly titled BEYOND ACHERON.

To be fair, Acheron had essentially become a solo vehicle for Crowley a long time ago, so my curiosity was immediately piqued by what a creatively unrestrained Vincent Crowley solo project would sound like. Would this be Acheron 2.0 under a different name, or was Vince going to write a Pink Floyd record? Thankfully the answer is neither, as BEYOND ACHERON presents itself as a confident and varied record that readily steps away from the shadow of “that other band” while finding other outlets to explore dark and heavy themes.

My immediate response after listening to BEYOND ACHERON was “Vince wrote a doom record”, but that’s not an entirely sufficient examination. The pipe organs and wallowing melody on the necrophiliac love story “My Eternal Vow” are new and exciting territory, as are the slow, deliberately measured intentions of “Masquerade Du Macabre” and “La Muerte.” Slightly more aggressive tracks like “Where No Light Shines” and “Bring Forth the Dead” recall Crowley’s vocal presence on later Acheron discs, but are thrashier and more melodic in nature than anything the guy has previously associated with. Which is the real takeaway with BEYOND ACHERON – there’s just enough to keep you rooted in what you’d expect to hear from the guy, but the balance of the album sounds like intentionally new territory.

My first exposure to Vincent Crowley was in 1992 with Acheron’s RITES OF THE BLACK MASS debut. And that was born out of a mail order ad in Metal Maniacs, just so you have some kind of gauge of how many centuries ago that was. Listening to that album and BEYOND ACHERON next to each other sounds like a lifetime has passed in between them, but that’s the point here.  The past is indeed the past, and we choose what tomorrow looks and sounds like.  It can still be heavy and evil, but it also doesn’t have to sound like the last 30 years.  At least until the inevitable next Acheron reunion.