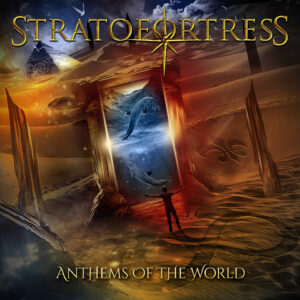 At the end of May a Stratovarius cover album aptly named ANTHEMS OF THE WORLD came out. Although the album brings together various musicians and groups, including former members of the legendary band, the entire project is called STRATOFORTRESS and is coordinated by Italian vocalist Iliour Griften.

ANTHEMS OF THE WORLD takes up songs from the different eras of Stratovarius including its golden age from the mid-90s and early 2000s to the present. Although they include the obligatory songs that everyone knows; luckily they also give space to new cuts like “Halcyon Days” and “Shine in the dark”.

The list of musicians and bands that make up this tribute is very extensive; the vast majority are underground musicians who show their talent when making a faithful and precise interpretation of the songs. With them we also find established musicians such as Bob Katsionis, Mike LePond and even Timo Tolkki himself.

We can say that this is an official tribute because it was mastered by the current guitarist of the band: Matias Kupiainen, which gives a kind of authentication stamp to all the songs; a nod that lets Stratovarius fans know that the songs they will hear are of quality.

ANTHEMS OF THE WORLD is a good album that will allow us to re-savor the songs that Stratovarius fans love so much; the new interpretations will give us a strange but pleasant sensation of listening to the pieces for the first time, a truly longed-for feeling.