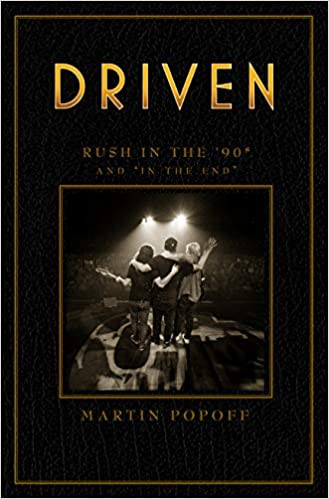 Back in November of 2020 I reviewed LIMELIGHT, the second book in Popoff’s epic Rush trilogy.  In that review I said,  “…Part III, DRIVEN, slated for release in 2021, is going to have half the musical output but triple the drama, heartache and heartbreak than the first two books combined.” Well, I wasn’t wrong!  That is the main source of (mild) discomfort reading DRIVEN is that it is a sad ending to something I have enjoyed for song.  We all know how the 40-year journey ends.  The band breaks up and Peart dies young. No hope for a reunion. The end. Welcome to the cold hard facts of real life.

So forgive me if I wasn’t jumping with joy to read DRIVEN documenting the last sad days of the band.   However, when the time came to sit down with DRIVEN, I gave my head a shake and adjusted my attitude to look at this a celebration of the band. Despite reading the bulk of this book on a work trip (in a hotel room up northern Canada, 800 km from home, on a very cold, grey rainy day) I thoroughly enjoyed it.

DRIVEN as we expected delivers on all fronts in terms of presentation. The same hard bound look and style, a discography and a nice introduction by Popoff.  In my review of the first book I noted that when it was done the three books will look really good as a set on my shelf and now they do.  The photo he choose for the cover is perfect and true rush fans will instantly recognize it and the importance of that photo.

As  Rush’s output dramatically declined to only six albums in almost a quarter of a century  it made a lot of sense for Popoff to spend more time examining the solo albums and slate of live albums that came relatively late in the bands career. In fact there is an entire, fascinating chapter on RUSH IN RIO where Popoff astutely observes that this was a bit of high-water mark for the band, a bit if a second wind to make that sprint to the finish line, to put it in bicycling terms for Peart.

Elsewhere we get a chapter-by-chapter, album-by-album dissection where many fans admire and respect the veterans later-era albums despite a mild, lingering sense that the halcyon days may be in the past. This is why I think I like DRIVEN so much, because Popoff takes the time and care to really look into albums like VAPOUR TRAILS that got a fraction of the love and attention of a 2112 or MOVING PICTURES.   As always Popoff is fair and balanced even if he does express some disdain for some of the records like ROLL THE BONES which didn’t rock as much as others.

The usual cast of characters are in place adding comments, roadies, managers, producers, engineers, artists all contribute and comment.   I found the whole section where the band did not click with Kevin ‘Caveman’ Shirley during the recording sessions for COUNTERPARTS to be extremely revealing. Chalk it up to a lack of shared mutual vision. In the end Rush did what they want, as the artist should, but ultimately Shirley getting the last laugh as the band evolved into the heavier guitar driven sound he was pushing for back in 1992.

As for the highs and lows, they are there in spades. Triumphant performances, touring new markets, Governor General awards, Juno awards, documentaries, and of course the Rock And Roll Hall Of Fame Induction.  The lows are even lower from uncharacteristic, bizarre, semi-drunken New Year’s eve bar fights, Peart’s double tragedy, physical ailments, and the ever decreasing productivity. More drama, more pathos and frankly more interesting.

I don’t think that anyone can or will do a better job chronicling the band and DRIVEN is the penultimate finale of the tale of one of world’s greatest rock bands.