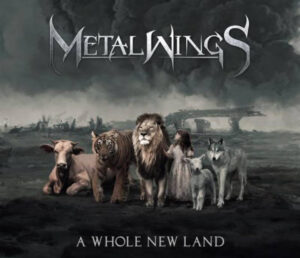 Metalwings is a band originally from Sofia, Bulgaria and born in 2010. For more than ten years they have throbbed with great force in the under European scene and it has been thanks to their perseverance and dedication that today we can say that they are not an unknown band nor improvised. At the beginning of June the band presented their second full-length titled A WHOLE NEW WORLD (2021), an album released independently but that maintains a professional quality.

Stela Atasanova is the heart that makes all Metalwings beat. She is the main composer and lyricist of the group, she is also in charge of the orchestral arrangements, so we are facing one of the most creative minds that there can be today in symphonic metal.

The interesting thing is that her style manages to offer what a fanatic expects of the genre even without sounding like the rest of the groups in the field. Her classical training is clearly noticeable at the time of composing, since the songs shine thanks to the melody that she manages to capture in her vocal lines; guitar distortions are just an accompaniment.

The orchestral arrangements are perfectly assembled to the songs; it’s amazing how natural all the instruments sound together. It is no coincidence that they have chosen “Monster in the Mirror” as one of their first singles (the first was “Still Believe In Us”) because that song captured all the compositional horizons that the band has; it is enough to listen to the guitar and viola passage to realize the great compositional depth of Atasanova.

The work of mixing and mastering by Jens Bogren gave the sound of Metalwings that professional touch to all the songs, allowing all the instruments to shine. Even though the passages have distorted guitars, Atasanova’s choral voices and string arrangements can be heard clearly, as in the song “Like a Willow Without Tears”.

Stela Atasanova is a great example of effort and dedication. Her talent has been perfectly embodied in A WHOLE NEW WORLD, an album that has no weak point and that rises to the heights as a sincere and authentic display of love for music.