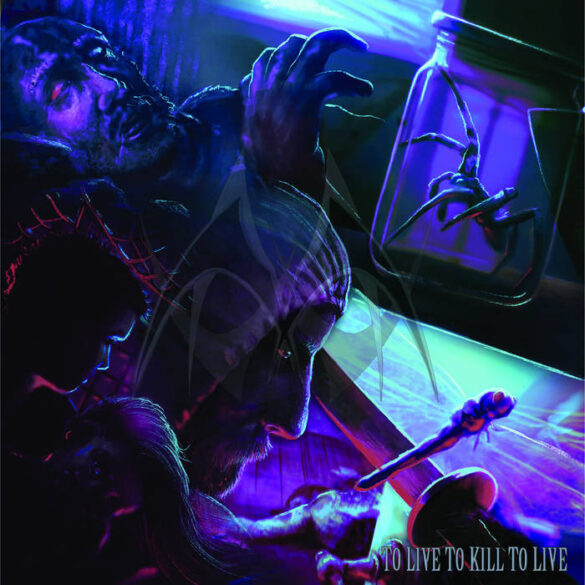 I like bands that have extra drive and ambition in their creative endeavours.  Any Metal bands can write, record and release and album but it takes a little more effort and creativity to go beyond. Manticora is one of those bands.  In 2018 and 2020 Manticora released a pair of concept albums; TO KILL TO LIVE TO KILL and TO LIVE TO KILL TO LIVE.  When these albums first came out I was a bit perplexed by the slightly confusing titles and in all honesty did not fully comprehend the story. I enjoyed the albums immensely but did not fully embrace the concept… until I read the book.

Founding member and vocalist Lars F. Larsen wrote a book called TO KILL TO LIVE TO KILL and it is fictional tale that ties into the double concept albums and fleshes out the story.  That is what I was referring to earlier when I said I like bands that put more effort into it. This month I’m going to review all three in an examination of this ambitious and exciting phase of the bands career.   Please feel free to read all three reviews in this feature.  In case you reading this first, I strongly urge you to go and read the book review and review of TO KILL TO LIVE TO KILL  (Part I) first.

I’ve covered a lot of ground in this big three-part review so this one will be a bit shorter.  In 2020 the band put out the conclusion of the story.  Not much has changed since 2018 except that bassist Kapser has returned to the fold.  The band is still with ViciSoulm who helped make a gorgeous presentation consisting of a 16-page full-colour booklet with individual illustrations per song.

The story continues one of the highlights being the gruesome cut, ‘The Farmer’s Tale Part. 3-Eaten By The Beasts’, which happened to be the first single off the album as well.  The songs are probably the hardest and heaviest the band has ever been the fierce sounds complimenting the grim story. Japanese narration comprises the entirety of the song ‘Ten Thousand Cold Nights’ which adds an international flair to the album.   The occasional harsh vocals, raging guitars, speed and power maybe giver this the slightly heavier edge than TO KILL TO LIVE TO KILL.

In my mind you can’t really just buy this album and not Part I, that wouldn’t make sense.  The albums are meant (in my mind anyway) to be heard back to back in their entirety. TO LIVE TO KILL TO LIVE is the perfect continuation of, and conclusion to, the horror saga.

This saga may be the high-point of the bands career and well worth your time and energy to embrace this fine work of dark Metallic art.