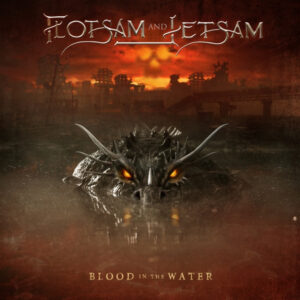 Flotsam and Jetsam have a ferocious new CD, Blood in the Water, coming out on June 4th via AFM Records!

With a musical legacy that goes back well over 35 years. It’s hard to believe that their debut album release, Doomsday for The Deceiver, came out in the summer of 1986. Fast-forward 35 years and several member changes, the band continues to get better with each released. Flotsam and Jetsam consist of Eric “AK” Knutson [vocals], Mike Gilbert [guitar], Steve Conley [guitar], Bill Bodily [bass], and Ken K Mary [drums].

Blood in the Water is their 14th album and, without a doubt, one of their best music of their career. Flotsam and Jetsam smell blood in the water this time around. Twelve tracks that will shred the listener’s ears and pummel the band’s message into the hearts of the most diehard metal fans. The lead-off and title track, “Blood in the Water,” lets you know right off that these guys aren’t messing.

I enjoyed speaking with drummer Ken K. Mary about the creation of Blood in the Water, Flotsam, and Jetsam’s future touring plans, and getting a behind the scenes look at his time working with Alice Cooper!