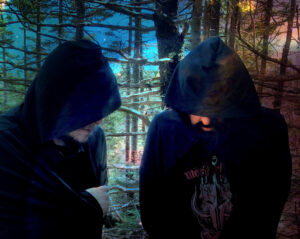 Coming from the bleak coastal city of St. John’s, Newfoundland, Artach brings forth a wave of black metal inspired by the cold, damp terrain they call home. Their upcoming release “Sworn to Avenge” will send a chill down the spines of listeners. Leading up to the album’s debut, they have a lyric music video for the single “Into the Frozen Woodlands”.

“Sworn to Avenge” is eight pummeling tracks, that clock in at just over an hour in total and is the follow up to 2020’s “Chronicles of a Black Winter”. What can listeners expect from this new album? According to Artach, it’s similar to the first, as they explain:

“Anyone who enjoyed our first release will be pleased. We haven’t drifted from the raw energy from the style on the first release. We have improved and tried some new things, but the format we established from the very first song we wrote hasn’t been forgotten.”

The single “Into the Frozen Woodlands” is loosely based on the book/film “Into The Wild”. Through abrasive and raw black metal, it explores thoughts of leaving the shitty world behind and wandering into the wilderness. Of course, it didn’t end well for the unprepared protagonist in this story.

Artach has been working quickly since they first formed, with the desire to play raw and noisy music. Within nine months, they had an album’s worth of material recorded. Now, a little over a year later they have more than enough for the second album.

Cold and dramatic, Artach is recommended for fans of Venom, Immortal, and Celtic Frost.

“Sworn to Avenge” is being released on June 25th via Depressive Illusions and is available for pre-order / save at the following links: DepressiveIllusions.com, Artach.bandcamp.com, Amazon, Spotify.

About:
Artach is a two-man black metal band (Sruthán: Guitar/Bass, Fíochmhar: Battery/Vokills/Keys)based in St. John’s, Newfoundland, Canada. Being from the foggiest, snowiest, wettest, windiest, and gloomiest capital city in Canada, one should not be surprised that this fuels the creation of Black Metal. Their inspiration comes from the land, nature, the bleak weather of the Canadian North, and influential black metal bands.

Since the duo’s formation in the spring of 2019, Artach has been consistently releasing new music. The band’s debut album “Chronicles of a Black Winter” was released digitally during February 2020 and later unleashed on physical CD by Depressive Illusions Records. The full length contained 9 songs of extreme, harsh, and haunting sounds, which included a cover of Celtic Frost’s ‘Jewel Throne’.

Now in 2021, the band returns with their next offering “Sworn To Avenge”, a full-length scourge of raw and relentless bruting gloom. From the calming blasts and savagery of album opener “Tuiteam an Duine” to the ingrained black metal blast beats, and headbanging riffage on “Shimmer” to the 20-minute exploration for the epic “Endless Tundra” about the doomed Franklin expedition of 1846 to the Immortal-esque riffing and unorthodox exorcism of album closer “Winter’s End”, Artach delivers a 65-minute cold deliverance of their surroundings.

“The music on ‘Sworn To Avenge’ is a frigid mixture of topics about nature and how it meets and interacts with the darkness of humankind. The desolation of the world, the planet, and the repeated failure of society to evolve to a place where we are a part of nature and not brutish subjugators of everything in our path… these are all themes described throughout many songs. The music is angry, savage, unhinged, but contains melody and some twists and turns to surprise the listener. Varied song tempos mixing blasting with thrashy, punky, doomy elements keep the sounds interesting and not monotone. Song structures often vary and we never limit a song to a certain length. We indulge and have them be as long, or as short as we think feels right.”

“Sworn To Avenge” will be available digitally from Artach along with CD and cassette via Depressive Illusions Records on June 2021.