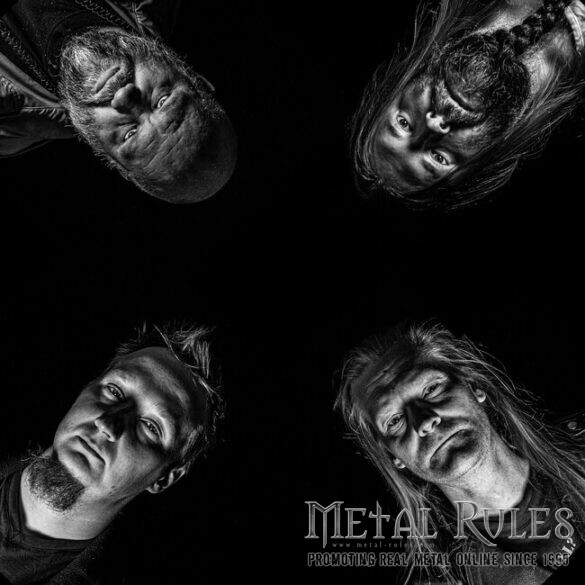 Hi! Thank you for the interview. I’m Esa Orjatsalo and  I play guitar in Bloody Hell.

Welcome back to the scene, it has been quite a while since your first full-length album! What have you been up to in the last 6 years?

Yes, it has… We actually started working on the album already about 3 years ago, but then there were some changes in the line up of the band etc. and it then took a lot longer time to produce the album than we anticipated. We kept changing the songs and structures, then suddenly a couple of years passed… We also played some shows in Finland and in Russia during this time.

And my next question is, what inspired the return now? Did the album just happen or was it somehow planned?

How is “The Bloodening” different from “Bloody Hell?”

Better in every way! Better production, better songs, better Bloody Hell! The first album was just a collection of songs that got somehow released. Yes, there is a couple of great songs there, but that album really lacks direction. It’s a bit of a hodgepodge of songs that just happen to be on the same release. The Bloodening on the other hand much better-thought-out album. Songs work together much better and there is a certain type how to say it arch of drama on the album.

Did the pandemic affect the production of the album?

A bit yes. We have some people who are in the risk groups in the band, so we had to be a bit careful getting together. Luckily the album was almost done before the pandemic started so it didn’t hinder the production that much. The release was completely another thing… with that the pandemic really postponed it. Originally the album was supposed to come out already last year, but because of the pandemic, it was only released this year. 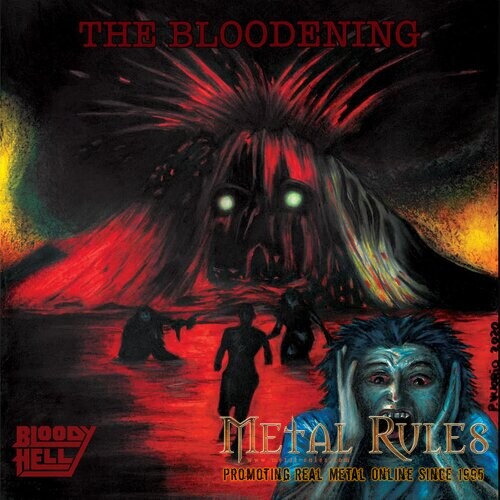 What’s behind the choice for the title?

To be honest, it is from the Simpsons TV show. There is an episode where the children in Springfield have a curfew and they sneak out to see the scariest horror movie ever made which was called “The Bloodening”. We thought it fits our style perfectly and so we decided to call the album that. It works very well, Bloody Hell and the Bloodening!

“Burn Witch Burn” is about the dark side of social media: how did the song come to life? Did you have a direct experience in that sense?

Not that much direct experience, but the trend can easily be seen all around the world. People used to be shy to shout their stupid uneducated opinions before, but now they proudly tell how they feel about everything without ever spending an actual minute to think things through. It is really annoying and I hope that at some point we get back to this that people start respecting well-thought-out writing not just some drivel spouted on the internet by pissed off morons.

You have quite a few guests on the album, how did the collaboration with Mika Grönholm, Micko Hell and Tom Rask happen?

During the production of the album, Tom was actually a member of the band, but he quitted around the time we finished the album. Mika Grönholm is Tom’s friend and he asked Mika to play the solo on the last track of the album. Micko is an old friend of ours and he has been helping with some vocals previously also for us. He has a great voice and it is always a pleasure to work with him.

Where do you take your inspiration from?

I suppose the obvious answer here is beer! Bloody Hell is all about beer-drinking partying metalheads making music together. We are not reinventing the wheel, we just want to make music that we enjoy. Of course, some occult themes also apply, it’s always good to include some of those in the mix.

If you could pick an artist (dead or alive) to have as a special guest in the next album who would it be?

Lemmy. No question about it.

How did you guys meet? And do you hang out outside the band?

Marko and Jaakko met in ancient times at the turn of the millennia. I met Marko and Jaakko first time when they came into my studio to record the first album of Moottörin Jyrinä. I continued to record and produce albums with them and at some point, they also visited the studio with the back then incarnation of Bloody Hell.  A few years later the guitar player of Moottörin Jyrinä quitted and they asked me to play with them. Bloody Hell was inactive at that point in time. Somehow we just decided to revive Bloody Hell and here we are. Atte I’ve known pretty much about the same time like Marko and Jaakko (and played with him on several albums already), so when Bloody Hell needed a new drummer Atte was a kinda natural choice.

We do hang out in our free time also. Just this weekend we had a bit of a get-together with beer and whiskey. We also go to bars together (when there is no pandemic and bars are open).

Who chose the name of the band?

Marko and Jaakko came up with the name of the band. It is a great name. It really shows what we are all about. Heavy Metal and good times!

What do you do in your free time? Did you pick up any new hobbies in these odd 12 months?

What free time? Well, to be honest, I run my own music studio and produce music for various people and I also write music for commercials etc. and work as a ghostwriter sometimes. So my hobby became my profession. Besides that, I started drawing again during this pandemic and bought a gaming console for the first time in my life!

Can you tell me a bit more about “Moottörin Jyrinä”? It’s such a cool project, how did it come to life? And how has been received? And is it still active or could it be active again in the near future?

Marko and Jaakko both used to work as kindergarten teachers. They got really fed up with these songs that were always played and decided to make some better music for the kids. Moottörin Jyrinä actually enjoyed a good bit of success with their two first albums. People really seemed to enjoy this kind of music for children. The band is still active, we had a little break for a couple of years, but now we have activated again. A new album is in the process and hopefully will be out later this year.

Finland is famous to be a “heavy metal country”, but what does it really mean to be a Finnish metal band?

Well, I suppose when you come from a country with this strong metal scene you are very aware of the quality of the production etc. of other bands coming from your country. Otherwise, I don’t think it affects us that much. We do what we do the way we do and don’t care what others are doing. Of course, the strong scene in Finland helps a bit since people know that if you are a “recording artist” from Finland that is a promise of a certain level in the production and songwriting.

Do you have a favourite Finnish metal band?

A really like Tarot. Stratovarius used to be great back in the days when I was a teenager.

How was your tour in Russia? Are you planning to go back whenever touring will be possible again?

Most definitely we are going to return to Russia! It was a great time playing there. We were a bit surprised how well we were received there as I don’t think our first album received any sort of promotion in Russia. I hope with the new album we can attract even bigger audiences in Russia on future tours.

How is the rest of 2021 looking for the band? Are you thinking about any live shows?

We certainly hope we can have some live shows this year. I think with the vaccinations etc. it starts to look that live shows are back on the menu later this year. I’m really waiting to be able to play live again. We have also started the writing process for the next album, which will hopefully come out a bit faster than 6 years.

What would you say to a 15-year-old starting a heavy metal band?

Have fun! That’s the main thing people sometimes seem to forget. Don’t care what other people are saying or doing, find your own voice. If you’re having fun and you’re doing the thing you like to do, other people will see that and enjoy what you are doing also. Don’t think about money or other bullshit. If you want money from music, metal is not the genre you should be making.

Is there anything else that you would like to say to our readers?