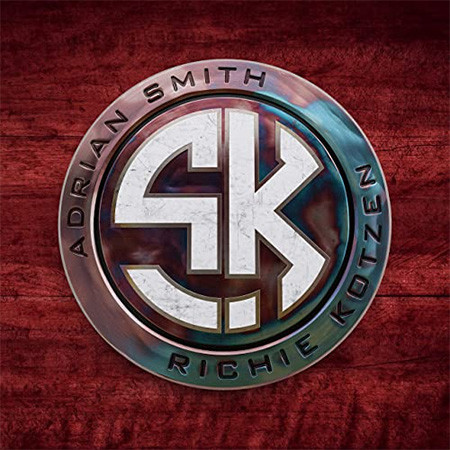 When I first heard that Adrian Smith and Richie Kotzen were teaming up for an album, my knee-jerk reaction was, “Hmmm.  I’m not sure how that’s going to work.”   We all know Adrian Smith’s remarkable body of work with Iron Maiden and Bruce Dickinson’s solo albums.  Historically, Richie Kotzen has been one of the most overlooked yet prolific guitarists in the hard rock genre.  Seemingly polar opposites in writing style and playing, I wondered if this would be yet another failed “supergroup” attempt.  As the first few seconds of the opening song, “Taking My Chances” blasted through my speakers, all doubt was completely obliterated!

Think back, if you will, to the dawn of the “shredder” age with the birth of the mighty Shrapnel Records.  Remember the absolute shock and awe of listening to Paul Gilbert and Racer X?  How about the sonic fury of Cacophony with Marty Friedman and Jason Becker?  Those artists made an entire generation of guitarists rethink their approach to their instrument.  Fast forward three decades later, and we have an equally impressive landmark album that should make this generation of guitarists head humbly back to the proverbial woodshed to sharpen their skills.  The massive quantity of jaw dropping licks and solos on this album is utterly mind boggling.

Richie and Adrian have gifted us a masterpiece of bluesy hard rock, drawing stylistically from the 70’s, 80’s and 90’s.   The tunes are not just there to showcase each artist’s soloing prowess.   They are far, far more.  They are hook filled, melody driven vehicles packed with atmosphere and attitude.  Equally impressive are the vocals of each player. Richie’s soulful smoky vocals have always been yet another weapon in his impressive artistic arsenal. Imagine my sheer delight when I heard Adrian completely going toe to toe vocally with Richie.  Simply brilliant!
The album flows from song to song leaving the listener nearly salivating for the next tasty morsel of auditory goodness.  The tradeoff solos are spectacular.  All tracks offer enough guitar and vocal wizardry to make even the most advanced musician grin from ear to ear for a very long time. Picking stand out tunes is virtually impossible.  I found myself shaking my head in disbelief the most when listening to “Taking My Chances”, “Scars”, “Some People”, “Glory Road” and “You Don’t Know Me.”

For all fans of blues-based rock, SMITH/KOTZEN will thrill and amaze.  The virtuoso guitar tandem have presented us with an aural “How To” textbook of song construction, melody development and solo phrasing. With equally impressive vocal performances from each artist, this album should (and WILL) make musicians of all skill levels take note and re-evaluate their approach to their craft.  Do NOT miss out on one of the most impressive rock albums of the last decade!