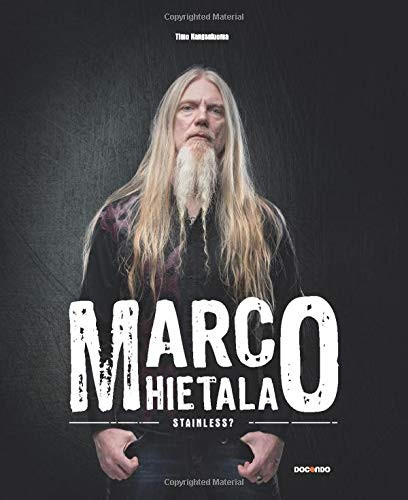 The Metal world was stunned in early 2021 when Marco Hietala, the bassist and co-lead singer of Nightwish, announced that he was leaving the band. Nightwish is arguably one of the biggest Metal bands on the planet and scenario this was not unlike Roth leaving Van Halen or Dickinson leaving Iron Maiden.  It is hard to comprehend why someone with seemingly so much would leave at the pinnacle of success.  Not long after his announcement I discovered that Hietala had actually written his autobiography a few years ago and so I felt it was timely to review this book.  This month, I also reviewed another Nightwish related title, WE ARE HERE, so feel free to enjoy that as well.

As for Hietala’s book, it is simply titled STAINLESS? and this slightly oversized paperback seems to be one of those print-on-demand books from Amazon.  I’ve read a few Amazon on demand books before and the quality is usually pretty horrible but this one is very decent.  The paper and font are nice, it’s glossy, full-colour and the layout and design are well done.  The 190+ page book is packed with colour photos as well.  The book was co-created by Timo Kangasluoma a popular Finnish journalist. I’m not quite sure how it came together but this might have been the result of interviews with Hietala and Kangasluoma put it together. It is written in the first person so technically it is Hietala’s autobiography.

STAINLESS? seems to be a bit more of a pop-culture look at the famous and well-known musician. It was a very, quick easy read. I do not want to say that it was not serious but based on the tone and presentation I feel it was based for a mass audience, rather than just die-hard Nightwish fans. In fact, there is very little about Nightwish at all in this book and he speaks to that. He refers us to instead read the book NIGHTWISH by Mape Ollila, and you can read my review of that book as well if you wish.  Instead we learned a lot about his main band Tarot and quite a bit about Sinergy, Raskasta Joulua and he even touches briefly on Northern Kings.  We get special insight from across his long career; from driving at night in winter on a cramped bus to horrible empty gigs in the middle of nowhere to flying on private planes and massive gigs like Wembley.

After a nice foreword by Tuomas Holopainen, Hietala takes us on his life journey.  He has lived several lifetimes, driven, ambitious and hardworking. The book could have been twice as long.  There is an undercurrent of melancholy as Hietala has suffered from depression and alcoholism for many years, as well as constant infidelity and a failed marriage.  He blames no one but himself but also says that he needs to do what he needs to do to be happy and a rock star life-style is not conducive to a stable home-life. Hietala interjects any number of deeper philosophical points about politic, religion and the nature of human relationships but without being preachy or lecturing the reader.

STAINLESS has very little to say about his colleagues in other bands, aside from Tarot which were some of his childhood friends so he can talk more freely.  I think he respects the privacy of the people in Nightwish, so we don’t get very many sex, drugs and rock and roll road tales, which also reinforces my perception this might be aimed at a more mainstream audience.

I’ve mentioned in the past that autobiographies from Europeans Metal artists are exceedingly rare, maybe less than 20 exist to date.  I’ve read most of them and while maybe a bit thin on detail, it was a very interesting look at one of the most famous European Metal artists of modern times.