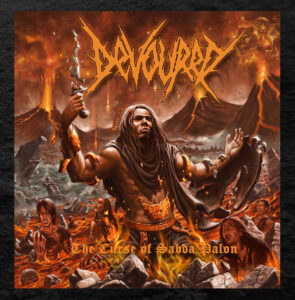 Indonesian death metallers Devoured have a long history with not a whole lot to show for it. The band formed in 1998, but didn’t release their debut full length The Lost Kingdom until 2012, after a series of demos and splits. By then, only frontman Nyoman Sastrawan was left from the original lineup, with most of the others having jumped ship just before or soon after the first pair of demos appeared in 2002-2003.

But when 2021 rolled around and the quintet were ready to issue a follow up to Kingdom, everyone who played on the debut remained, with second guitarist Ardian Woodman Nurilanwar being added in 2016. So Devoured were a much more cohesive unit when it came time to finally hit the studio.

And where Kingdom was mostly a mish-mash of the earlier demo material, The Curse Of Sabda Palon is a much more crafty and ambitious proposition. Indeed, Sabda Palon is full-blown concept album based on, according to their promo materials, “the age of kings in Java dwipa; the great Majapahit kingdom, about 1294-1478,” that is doomed by its own hubris – a timeless theme we can still see playing out in the world around us today.

That’s a far cry from, say, “Zombie Massacre,” one of the band’s earliest songs, that was featured on Kingdom and which boasted such regrettable lyrics as “Fuck’n ass bitches out on my street corner, Sliced the bitch apart no one came to her but only bastard.” I’m sure the band’s grasp of English has improved in the intervening years, but that’s really a moot point here since much if not all of the storyline in Sabda Palon is told in their native tongue – only the title track and the forboding closer “Dreaming In Red” don’t have Javanese titles.

Still, you can take the band out of the old school, but you often can’t take the old school out of the band. And despite a 20-plus year history and Sabda Palon’s high-minded concept, Devoured’s music remains decidedly raw and primal, recalling vintage Entombed/Dismember, Death/Massacre and Morbid Visions-era Sepultura for handy comparisons.

The gnashing guitars boast a Sunlight Studio-style grit, the drums provide a prominent d-beat gallop and Sastrawan’s rasping vocals come from deep down in the gut a la Kam Lee. Any sort of traditional/Indonesian flourishes – save for the lyrics – are done largely in passing to the point where you barely notice them. And most of the usual concept album contrivances – segues, orchestrations, etc. – are conspicuous in their absence, other than the instrumental title track that introduces the album.

Instead, it’s heads down and all-ahead full, for the most part, for these guys. Devoured do a more than serviceable job of doling out their old school death metal. The band’s influences may be fairly obvious, but they stay away from mere idol worship as they build more of a composite sound that offers hints without outright mimicry. And they deliver it all with gusto – especially Sastrawan with his surly growl – and a considerable amount of skill.

Sabda Palon is a better sounding, more accomplished album that what one – and notably myself – might be expecting. The clever the guitar harmonizing and dramatic sweeps from Nurilanwar and Safik Rosad are a high point. And despite the band’s bulldog delivery, there is no shortage of complexity in the material that takes a few listens to appreciate given the buzz-sawing/clangorous production – and I don’t mean that as a negative.