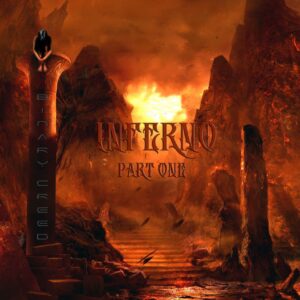 Umeå, Sweden’s Binary Creed are set to return with their first release since 2016’s A BATTLE WON. INFERNO PART 1 is the first of two planned releases this year, with the second part expected late in 2021. There have been some significant changes to the lineup since we last heard from the band. Vocalist Andreas Staltz is out and has been replaced by Rickard Thelin, guitarist and vocalist for progressive/power metal band Summoned Tide. Keyboardist Peo Olofsson, drummer Peter Widding and bass guitarist Robert Rasmussen Ahlenius are also not part of the new lineup. Stefan Rådlund handles all bass, guitar and keyboard duties while new drummer Molgan steps up as beat keeper.

Despite the lineup changes, Binary Creed has not stumbled, as the opening track quickly proves Thelin to be a superior vocalist to Staltz on “Pacific Control”, a song that recalls the great World War II naval Battle of Leyte Gulf. INFERNO PART 1 does not offer anything new or unique, but the songs are generally strong and well-written. The band’s brand of European progressive power metal will be familiar to fans of Crystal Eyes and Kamelot. Thelin possesses a somewhat distinctive voice and timbre as he employs unconventional melodies and frequent doubling of his vocals to great effect.

One of the album’s most impressive qualities is the melodic and shredding solos of Rådlund. While Rådlund is capable of speed and sweep picking, check out the awesome sustained note on “Pacific Control” that kicks off an epic guitar solo with its accompanied staccato rhythm section. This type of restraint is not employed enough in metal anymore. The keyboards naturally add a symphonic quality to the music, but they do not feel as overblown as on some power metal albums. All told, the album is fairly uniform regarding songs and a mid-paced tempo with flourishes of speedier sections. “Mother” is the exception, drawing inspiration from Avantasia except with some brutal death vocals included! It is also the catchiest and most memorable tune on the album, Binary Creed saving the best for last and setting the stage perfectly for INFERNO PART 2 later this year.

As expected with progressive power metal, the mix is meticulous and clear, made more impressive in that all production and mixing was handled by Rådlund and Thelin. INFERNO PART 1 is an album that fans of this style of power metal will appreciate from a band that focuses on the purity of the style without regard to being the next Sabaton or Dragonforce. Sure, some songs blend together, but taken as a whole Binary Creed has refused to let significant lineup changes or the pandemic prevent them from releasing a worthy album.