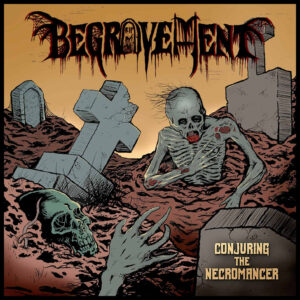 Begravement is actually a bunch of kids…..barely 18…making death metal. Formed in 2018 I was quite surprised when I first listened to them. I was expecting something passable but did not expect much else. Well let me say that these kids have been busy because their most recent release is the EP, CONJURNG THE NECROMANCER, is their third release with a demo and a single under their belt so they know their way around a studio a bit. But what impressed me the most was how mature and professional this sounded. And it being a 30 minute EP, I’ve reviewed full lengths that were shorter. However, it is what they did with the time they had and let me tell you, they are quite good.

The opener, “To The Grave,” starts with an eerie sounding intro that bursts into crushing riffs and unrelenting speed. The vocals go between guttural growls and shrieks. But what is impressing me the most is the songwriting and the execution. The riffs are massive and there are plenty to go around. The solo is actually quite good, which is another thing that makes for quality death metal. “Destroying Angel” follows and this one is a bit more accessible and even melodic. The tempo is more traditional metal than death metal and there is even some organ in there. I did not see that one coming. Again, another tasty solo to add even more value to this song. But it was third song in, “Death-Obsessed” that made me realize that there is something special going on here. Starting out in almost a groovy thrash direction the song goes right for the throat about a minute in with some sick riffs and vicious vocals. A couple of really tasty solos and you have one monstrous death metal song.

The other three songs are more of the same; killer death metal that could have been made by any established band out there. Again, this completely blew away my expectations. One listen to “Opaque Malevolence” and you would never believe this was teenagers. Brutal and rather technical in its execution, it can come off as a bit disjointed but the rhythm section kept the time and it actually came off quite well. You can hear the youth in the vocals on this one at times, when not in the guttural range. The title track follows with more technicality and time changes. Not as disjointed as the previous song, the riffs here are absolutely brilliant. Then halfway through the song we go way off the rails with a strange clean vocal section but for some reason it works. Again, the solos rip through the song adding so much to the song.

It’s not that often that I run across a bunch of teenagers from St. Paul, Minnesota playing quality, well produced death metal. I would put this album up against the early demos of any of the classic death metal bands. The songwriting, the musicianship, the production, the technicality….everything you could want in a death metal band. I’m already looking forward to what these guys will do next but for now, they are off to a killer start! 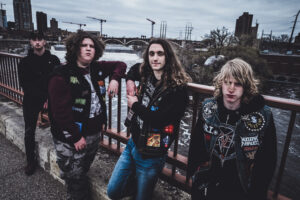