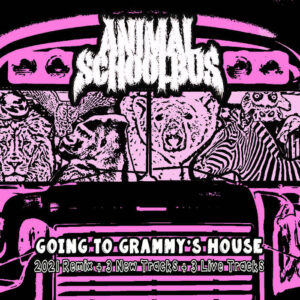 Every band needs a gimmick, even in grindcore. Maybe it’s funny outfits like Birdflesh, maybe it’s wearing blood soaked scrubs like Hemorrhage or General Surgery. Or Maybe it’s starting a band with your then 2 year old daughter, because at the end of the day, don’t all grind singers sound like fussy toddlers when you think about it? And it’d certainly be easy enough to lump Animal Schoolbus alongside the silly schtick of Caninus or Hatebeak, listening to the 2021 remix of GOING TO GRAMMY’S HOUSE just might have you rethinking things.

Originally released in 2014 when vocalist Princess Beast was a mere 2 years old, GOING TO GRAMMY’S HOUSE has been given a fresh coat of sonic paint and rounded out with some newer studio tracks from 2020 (when Princess was the ripe ol’ age of 9), and a handful of live tracks for good measure. The end result is an adorable, yet oddly satisfying collection of indie grind that will just as easily have you muttering “aww, that’s cute” at the same time as you’re stage diving into your coffee table.

The first 14 tracks are from the original limited pressing of the album, and cover such hot button socio political issues as the color of Mommy’s car, birthdays, overweight dogs, and trying to pass off fruit snack as “candy” – which they are absolutely NOT. No BS here, multi-instrumentalist Charlie Sad Eyes lays down some monstrous musical foundations that balances out the Princess’ vocal scowling, and the tunes themselves come across as complete, creative missives. Give it a listen and tell me I’m wrong.

But the more recent material that’s been tacked on to the album is really, where it’s at. The riffs are heavier, the production is heavy as a brick, and Princess has really settled into a comfort zone with her vocals. “Everyone Had Mullets In The 80’s” espouses the virtues of Full and Fuller House, while “I Bet Taylor Swift Never Has To Clean Her Room” is clearly a standout track and is destined to be a classic. The timeless lyrics of “I don’t want to” and “how am I supposed to know what to pick up first?” hit me especially hard. I’m a grown ass man and I wrestle with those same thoughts every…day. And then there are a few “live” tracks tacked on for good measure that really demonstrate Princess Beast’s command of the mic, taunting a maybe fictional audience to move closer to the stage and comparing the pitwork to an Arianna Grande concert.

At the end of the day it’s the music that matters, and Animal Schoolbus sounds legit. GOING TO GRAMMY’S HOUSE 2021 REMIX is a DYI example of grassroots grindcore that’s equal parts heavy and adorable, which are adjectives I don’t think I’ve ever used together in an album review. But hopefully that’s enough to intrigue you to at least check out GOING TO GRAMMY’S HOUSE, because it’s absolutely worth it. Grind on Princess Beast, I can’t wait to hear about what’s vexing you next.