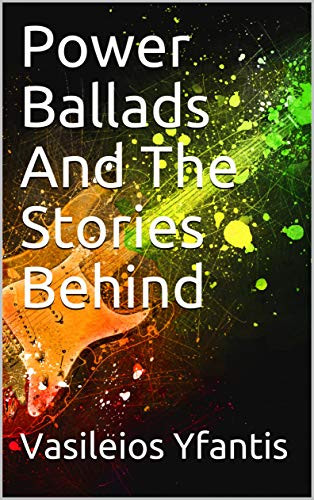 I have no problem admitting (as if it there should be some shame or guilt) that I love power ballads.  I have an 80’/90’s ballads play-list on my iPod that is several hundred songs long.   From 2013 to 2016 I did a radio show and each week I would my ‘Power Ballad Guarantee’ where I would play at least two power ballads over the course of the two-hour time slot.  People loved it and so did I. When I read that author Billy Yfantis had written a new book about power ballads, I knew I must have it.

Yfantis is a Greek musician, author and producer.  Fans of this site may recall I reviewed an earlier book (2017) of his called METAL GOES SCIENCE.   Several books later Yfantis is back to our pages with a new book called POWER BALLADS AND THE STORIES BEHIND. This is an independent publication, kind of one of those ‘print-on-demand’ titles so it won’t have a lot of frills. It does have quite a few photos, some candid, some promotional, some live, some old, some new so it has some visual appeal.

POWER BALLADS is short and sweet running just under 200 pages, with large font.  The concept is simple. Yfantis, an unabashed and dedicated fan of the power ballad, selected 56 songs and interviewed the people who created them. Easy!  The five or six questions are largely the same for each interviews and the e-mail interviews were conducted over three years.

Yfantis provides a brief introduction suggests that power ballads are universally loved because they hit that sweet spot between rock and pop.   I’m paraphrasing, but I felt it was an elegant way of describing it. I’ve never made the connection to pop, I thought it was rock going softer to provide sonic counterbalance.

Listed alphabetically, Yfantis provides a wide selection of bands from across the globe.  There is also a wide range of eras represented as well so it is not just teary-eyes nostalgia for the 80’s, we span four decades up until 2017, where bands, especially those on the Frontiers Record label for example, write and record power ballads. The art is not dead or outdated by any means.

The trivia gleaned from these interviews is phenomenal. From Henjo Richter’s (Gamma Ray) love for the Axxis ballad ‘Stay Don’t Leave Me’ to the stories are fascinating. Did you know that Jared Leto got his start in a Bangalore Choir video for ‘Loaded Gun’?  Neither did I. As a side note: Actually I didn’t know who Jared Leto is because I’m not a movie guy so I looked him up on Wikipedia. Apparently he is famous actor these days, but you get the point. Based on the movies he has been in I’d say his career has gone downhill since the glory days of the Banglalore Choir video.

The model Kate Moss once starred in a Stage Dolls video for the song, ‘Love Don’t Bother Me’.  Robin Beck’s ballad ‘First Time’ was in a commercial for Coca-Cola.  Jean Beauvoir’s song ‘Feel The Heat’ was in the action movie, Cobra starring Sylvester Stallone.   The book is packed with neat trivia like this.

Another strength of this book and the song selection is that it is not just all the big name, popular ballads and bands.  There is a nice mix.  We get to hear about hit’s like, ‘Just Take My Heart’ (Mr. Big), ‘The Angel Song’ (Great White) and ‘Close My Eyes Forever’ (Lita/Ozzy).  We also get to hear about many lesser known songs and even many lesser known bands.  It could have been too easy for Yfantis just do the big ballads by big bands. Instead we get the sense he really has a deep and passionate knowledge of the art-form as he features songs from bands like Newman, Vice, Wild Blue and Letchen Grey.  For the songs I did not know (and there were a few) I found myself running to the internet to hear the song, and I was never disappointed.

POWER BALLADS is a great examination of this style of song that many people still, for whatever reason, have trouble admitting they like. As cliché as it may be, raise your lighters, pay tribute to the mighty power ballad and add this book to your library!