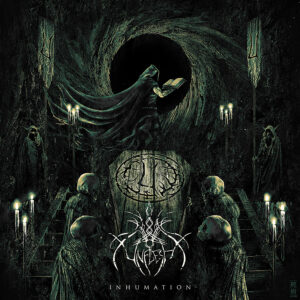 My appetite for technical metal of just about any ilk has waned considerably over time. And sorry to get all Grandpa Simpson “old man yells at cloud”-like, but it’s become way too much wank and not nearly enough substance. And the vocals have grown so consistently fucking awful it’s like why even bother?

So it’s always a nice surprise when someone like New Hampshire-based Unflesh come along and bring some actual meat to the table, so to speak. Though the promo materials for the band’s second album hit the usual tech-nerd touch points – Necrophagist, Obscura, Arsis – that only describes a portion of their approach and intent.

With an overhauled lineup that sees frontman/guitarist Ryan Beevers being joined by bassist Orin Hubbard and drummer Jeff Saltzman (also of Aversed and a live member of Allegaeon and Continuum), Unflesh streamlines things a bit from the uber-techy debut full-length Savior from 2018. That could be as much a factor of Beevers’ growth as a songwriter as it is a new set of bandmates, but the material and delivery are more focused and ferocious – while still not skimping on technical proficiency.

But here that is partnered with the tangled melodies and more confident, concise structures of “Vast Forest of Impaled Cadavers” or the title track to give them a Black Dahlia Murder-like approachability that was lacking on the more over-the-top debut. Even though it stretches beyond seven minutes, the harmonized guitar solos and acoustic passage on the title track are more inviting than showy. Elsewhere, the contrasting majestic sweep meets blunt object directness of “Amongst Horrors Must I Dwell” echoes Dissection, while “Holocaust of Stars” and “The Sepulchral Depths” shed any air of majesty and deliver sheer brute force, accentuated by Beevers’ emphatic holler.

The nine-minute finale “Dehumanized Legion” is really the only song here where things get a bit out of hand – as perhaps one might expect. With its myriad parts, modestly slower tempo and epic scale, it becomes a slog that overstays its welcome, even with its echoes of late-period/proggier Death. So things end more with a fizzle than a bang.

But that should take nothing away from the rest of Inhumation. With its more refined songs and tighter performances, not to mention a nice gritty mix from V. Santura (Dark Fortress/Triptykon) that eschews the usual sheen, Inhumation delivers its tech death with ample heft and purpose. The band are able to, for the most part, maintain a careful balance of agility, brutality and likability here and come away with something that even those who have grown weary of this sort of thing should be able sink their teeth into.