I’m going to date myself here, but bear with me. 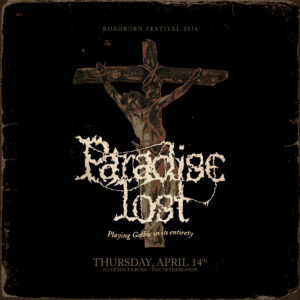 30 years ago, I walked into Murmur Records in College Park, FL and purchased LOST PARADISE and GOTHIC on cassette tape (they had one copy of each). I’d previously picked up a VHS copy of the “Grindcore” edition of Hard N’ Heavy that featured a number of bands that would go on to shape my life, but none more than Paradise Lost. Beyond their performance of “Dead Emotion”, Nick Holmes and Greg Mackintosh proved themselves to be an infectious comedy duo. That’s partially true, but PL’s combination of kinda sorta-death metal with melodies that made me feel sad was like nothing I’d experienced before.

I might be fudging my personal history a bit, but prior to Paradise Lost, the only doom I was familiar with was the first Cathedral tape and maybe some early Candlemass. But like so many other impressionable young metalheads, GOTHIC was turned out to be a life changing album. It evolved my sensibilities about what heavy metal music could sound like and would be an album that I would judge many, many others against in the decades to come. In 2016, Paradise Lost celebrated the 25th anniversary of GOTHIC by playing it in its entirety (some tracks for the first time ever) at the venerable Roadburn Festival And In recognition of GOTHIC’s now 30th anniversary in the middle of a global pandemic, Paradise Lost has made a recording of that Roadburn performance available exclusively through Bandcamp.

If there are any grievances with this recording, it’s that it may actually be too faithful to its studio counterpart, save for same tuning changes. But I suppose there’s a fine line between maintaining fan expectations when performing such a beloved album in its entirety vs. taking creative liberties on stage with tunes that you’ve been performing for as long as some of those same fans have been alive. Regardless, the band sounds great and these songs are still somehow just as relevant in 2021 as they were in 1991.

The light may be dim before us, and the shadows may appear and fall. But Paradise Lost is eternal and so is GOTHIC. GOTHIC LIVE AT ROADBURN 2016 is a monumental celebration of one of metal’s most important albums, and there’s no good reason not to check this one out.