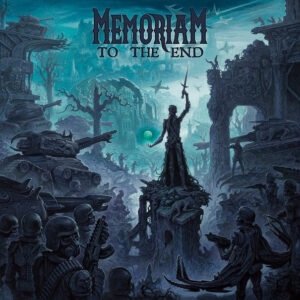 While it’s true that Memoriam have never represented themselves to be any sort of Bolt Thrower version 2.0, let’s be real…If it walks like a duck, quacks like a duck, and plays mid-tempo military themed death metal with Karl Willets’ signature snarl, it’s either a duck I really wanna party with, or it’s a sort of Bolt Thrower version 2.0. The shadow of the Warmaster has always loomed large across Memoriam’s catalog but the band gets a little closer to shaking off the ghosts of their past, with album number 4, TO THE END.

2019’s REQUIEM FOR MANKIND was a healthy kick in the shins that saw that band literally and figuratively accelerating things, while taking some well deserved chances with melodic harmonies and more epic song structures at the same time. TO THE END is a bit of a downshift back to the roots of their FOR THE FALLEN debut while choosing to embrace more of the Sacrilege inspired crust punk of their Birmingham past, as well as few other new tricks.

The opening “Onwards Into Battle” sounds like a re-engineered version of their namesake track that opened FOR THE FALLEN, and it definitely prompts a “haven’t I been here before?” moment. But consider the massive “This War Is Won” as the true album opener – fast, heavy, and unapologetic, it’s familiar while still staking its own flag in the ground. “Failure To Comply” is a timely capture of the social unrest that permeated across the U.S. last summer and proves that conflict is timeless and not always a chapter from a dusty history book. “Each Step (One Closer to the Grave)” is a doomy, gothic dirge that’s completely atypical from anything you’d usually associate Memoriam with. “Mass Psychosis” explores some atmospheric, almost Godflesh-like industrial dalliances, while the closing “As My Heart Grows Cold” is a sullen coda that pulses responsibly with surprisingly mellow melodic reflection.

There’s still plenty of the usual mid-tempo sonic assaults that will sate both fans of BT and Memoriam’s previous output, but TO THE END is their first record where I’ve made the conscious observation of “oh, this is different, they’re doing their own thing.” If you old school UK death metal and/or any of the last 3 Memoriam records, TO THE END would make a worthy addition to your music library. Though Bolt Thrower’s cannons have long since faded, TO THE END sounds like a band that is primed and ready to conquer.