Interview with Gus Monsanto of Human Fortress by John Haseltine

EPIC TALES & UNTOLD STORIES is the latest release by the German Power Metal band Human Fortress. This was the first time myself listening to Human Fortress. There is a proper review of this release here on the site. Even though this album delves into the back catalog of the band, it is a great place to start to get to know this immensely talented band and what they have to offer. So much so, I decided to ask vocalist Gus Monsanto a few questions in order to help our readers get to know who Human Fortress is and what they are up to these days.

MR: Tell us a bit about the band.

MR: This is an amazing release and my first encounter with Human Fortress. For those also unfamiliar with the band, how would you sell yourself to the unknowing masses?

GM: It`s a band that has a lot of epic and heavy elements, without the speed noodling most power metal combos do have. It`s a consistent bands and I hope you can count on this band to always deliver the kind of music fans of such music expect.

MR: The new release is comprised of two discs. One being new, rare, and unreleased material with the other being a best of. Can you give us a rundown or EPIC TALES & UNTOLD STORIES?

GM: When we recorded our previous album, “Reign of Gold”, we tracked 17 songs, if I am not mistaken. Each of us 6 members of the band decided to pick our favorite tunes out of the batch and issue the ones that didn`t end up on the release on an EP later on. Finally, we switched labels from AFM to Massacre (the original home of HF) and then it was decided to celebrate our 20th anniversary with a double CD, featuring a “Best Of” album as an introduction to the many music fans who are still not familiar with our music plus a first disc featuring a bunch of unheard songs. It`s a great introduction to our music and I am also very happy to see so many great songs not being unreleased anymore. Funny thing is most bands that have “leftovers” from record sessions do it because stuff is of inferior quality. But, I have to confess when we did the final track listing to the “Reign of Gold”, many of my absolute favorite tunes were not on the album. Now, I am a happy camper some of my favorites are finally out. 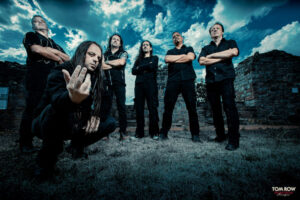 MR: Lyrically, and musically, where do you draw your inspiration from?

GM: Our guitar players are really into fantasy, swords and all the medieval imagery. There are lots of extra nuances and layers to the band`s music and lyrics, but I just try to make my best and get into the character and spirit of these songs.

MR: I’ve seen online here and there many bands in Europe have been doing shows lately. Has Human Fortress played any shows amidst the pandemic?

GM: Not at all. I don`t think it`s great timing for live music although we sorely miss it. I am based in Rio de Janeiro, Brazil, so I`ve greatly missed my HF brothers over the last year. Glad we had a lot of music to release and promote in the meantime, but I miss working with them, hanging out and making music.

MR: What are the plans so far, if any, to hit the road and start playing live again?

GM: I think we are on standby mode, as most musicians and human are, just keeping our fingers crossed and hoping for the best. People are craving for music again.

MR: What are your thoughts on playing live shows post-pandemic?

GM: We`re all like caged animals, the musicians I know… Everyone is dying to go on stage again. Ii have been recording tons of music, giving lots of vocal lessons, writing, etc. Maybe more than ever before…

MR: Does the rest of the band feel the same way?

GM: I am pretty sure…

MR: Although just released, what is up next for Human Fortress?

GM: Hopefully getting together sometime and making another new album after the storm is over.

MR: Thank you very much for an incredible new release. EPIC TALES & UNTOLD STORIES has just landed Human Fortress a new fan here. Anything you would like to add?

GM: Welcome aboard! We`ve been getting a lot of that lately and I am super thankful. Hope the metalheads discover or music and enjoy it as much as we love doing it.