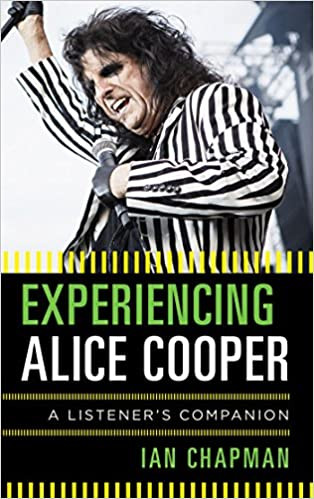 Alice Cooper is back with a new album and by a nice coincidence I discovered a book about Alice Cooper I had not read yet so I bought it, read it and I figure this is as good a time to review as any!

There is an interesting book series that I am only now just aware of. It is called ‘A Listener’s Companion’ published by Rowman & Littlefield.   The basic idea is that an expert on a band writes a detailed analysis of the music of that artist’s catalogue.  This is not unlike Martin Popoffs ‘song by song’ series.   As of 2021 there seem to be about 40 titles in the series covering all forms of music.  For our purposes at Metal-Rules.com, there are four in the series worth our attention; Led Zeppelin, Black Sabbath, Rush and Alice Cooper. I’m going to get and review the other ones as well.

EXPERIENCING ALICE COOPER-A LISTENER’S GUIDE is a nicely appointed hardcover book just over 200 pages.  The series has a semi-academic approach so it is black and white, there are no pictures, no celebrity endorsements or forewords . After a brief introduction from the author we just dive right into it.   The author in question is Ian Chapman, a die-hard, life-long Alice Cooper fan who holds a PhD from the University of Otago in New Zealand. He is a senior music lecturer and all-round expert on theatrical and glam rock. He also has a number of books under belt.

As one might expect the author starts at the beginning and goes song-by-song, album-by-album with a lyrical and musical analysis. I know that might not sound all that exciting, but that is where Chapman as a fan, really shines.   There is very little, in-depth musical analysis using technical terms, which suits me fine. When I read about scales, diminished fifths and arpeggios, my eyes gloss over.
Chapman, dare I say it, ‘dumbs it down’ for the average reader, a guy like me who has no musical training or theory.  However there are broad discussion of musical motifs and comparisons between Alice Coopers many musical phases; his glam years, his garage rock years, his industrial tinged years, his new wave era and more. Cooper is a musical chameleon as tastes and trends evolve and that is part of his ability to stay relevant. Chapman takes us on that journey.

I learned so much from this book and I think I know why I enjoyed it so much. Chapman discusses a lot of the presentation of the actual vinyl, the packaging, liner notes, lyrics and so on.  Because he is a bit older, he actually bought all that stuff when it came out and describes it loving detail.  I never got to experience that.  For me, I was a bit younger so I grew up buying Alice Cooper cassettes.  It might seem like a negligible difference but it is a crucial one. I grew up in the late 70’s and early 80’s ‘listening’ to Alice Cooper not ‘watching’ Alice Cooper. The cassette tapes did not have the glorious, fold-out, gatefold vinyl with guns and panties and billion dollar bills etc.  Most of the time the tapes didn’t even have  lyrics. I had to listen to the words!

Alice wasn’t really on TV, and if he was my parents probably would have not let me watch it anyway, so all the stuff about snakes and electric chairs, I was ignorant of.  It wasn’t really until the Constrictor era when I became more aware of Alice Cooper as a visual entity. Accordingly I really appreciated him talking about the detail and subtleties of the actual ‘songs’ not just the visual shock value.  It was many years later when I got to see DVD’s like THE STRANGE CASE OF ALICE COOPER LIVE IN 1979, where I was blown away by theatricality of it all.
(Note: This review is already too long but feel free to read a little extra personal anecdote at the end of this review)

What I appreciated most about Chapman’s work is that he avoids the fatal trap of ignoring the post-1986 career of Alice Cooper.  Of the three or four books or films about Alice Cooper that I have seen, all of them gloss over or completely ignore Coopers last 30 years in the business. With Chapman he covers every album from PRETTIES FOR YOU (1969) to PARANORMAL (2017).  I will admit he does get a bit thin of enthusiasm and detail about some of the albums like EYES OF ALICE COOPER and DIRTY DIAMONDS but even the albums he doesn’t like as much he is fair and balanced.

Some of the most interesting parts I found were the early 80’s stuff. He really digs into Cooper’s most forgotten (hated?) era 1980-1983 with FLUSH THE FASHION, SPECIAL FORCES ZIPPER CATCHES SKIN, and DADA.   Chapman’s enthusiasm is unending as he finds the few little gems, however few and far between, from that era but he also avoids being a gushing fan-boy. He will say that when an album failed, it failed.  He was able to separate his enjoyment of the lesser known songs and albums from the general public opinion and consensus and provide examples.  He will say, (paraphrased) Yes, Cooper was at a low point but if you listen to the ‘Song X’ and the lyrics on ‘Song Y’, you will catch a glimpse of what he was trying to do.  Maybe he is just an apologist but so am I.

EXPEREINCING ALICE COOPER is one of the best books I’ve read that actual talks about the music and lyrics of Alice Cooper, not just the golf, the TV appearances, the stage-show, and all the additional non-music stuff. The extraneous material is touched on for context but this book stays true to its purpose; a listeners guide. That is admirable because it is hard to do in a modern world where most people ‘listen with their eyes’, especially with an artist, like Alice Cooper, with so much visual flair.  This is a unique and important book for all true fans of Alice Cooper.

The first time I saw Alice Cooper was on the Constrictor tour.  I went by myself at age 16. No one else that I knew wanted to go but I wasn’t going to miss it.  I ended up way up in the cheap seats sitting with strangers.  These were older dudes, maybe 10 years older, true original fans.  They were the cool guys, smoking pot, drinking, talking about girls, all eye-opening stuff for a pretty naïve sub-urban kid.

They were not unfriendly by any means but I could tell from the comments and gentle teasing that to them I was just some kid and I could tell they were judging me as a new fan who had just discovered Alice Cooper.  That normally be a pretty reasonable assumption, there probably were a lot of ‘new’ fans there based on the big comeback era; people who were discovering Alice Cooper for the first time, based on his appearance at the Pontiac Silverdome with Jake The Snake at Wrestlemania III, or his appearance/duet with Dee Snider and Twisted Sister in the ‘Be Cruel to Your Schuel’ video, the Friday the 13th slasher movie tie-in and of course his huge comeback album CONSTRICTOR.

As the night went on these guys could see that I actually knew and loved all the old songs and I could chat about them on their level, and over that short 90 minutes I felt I gained a bit of respect perhaps for being a fan of the music.  I have no problem admitting that the validation from the older cool guys, even if they were strangers, made me feel good.  That point stuck with me all these years. If you know what you are taking about and can discuss it articulately then people will respect you, even if they have pre-judged you. If you fake it they will eat you alive. It also served as a double life-lesson to try not to judge people from afar, who may know as much, or probably more, than I ever will.

To tie it all in with the book review, the music and lyrics of Alice Cooper are more important to me than the image. To see Alice Cooper get his head chopped off every night on stage? That is just the icing on the cake and the roses on white lace.