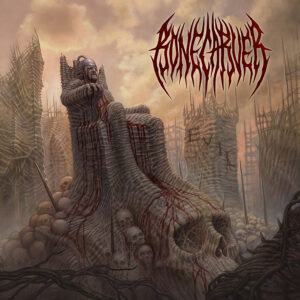 So after two self-released albums as Cannibal Grandpa – a moniker inspired by early 20th century serial killer Albert Fish, who was essentially just that – the Spanish brutes wisely changed their name to something more typically, well, “brutal” when they signed with Unique Leader Records in 2020. And thus we now have Bonecarver.

Doesn’t quite have the ring to it as Cannibal Grandpa, but it has no potentially comic connotations – intentional or otherwise – and aptly describes the band’s murderous mix of brutal death/slam metal and deathcore, with just a touch of symphonic bluster. Bonecarver’s press materials claim “they represent Madrid’s brutality at its best,” and it’s hard to argue otherwise.

Evil is as punishing and unrelenting as it comes. Between the thunderous slashing/chugging riffs; bowel-loosening breakdowns; a hulking, limber, almost djenty bottom end; and frontman Fernando Del Villar’s shreik/growl/urp/pig squeal vocal gymnastics, these guys really do bring it all. And with a vehemence and purpose that is almost startling.

“This is the day when the sheep tears the wolf apart, The squid strangles the shark, And the blossoms poison the swarms,” Del Villar offers as “Revolver” gets things started with the tale that sadly played out for real in the states just as Evil was released in early March, with mass shootings in Atlanta and Boulder, Colorado. Things only get grimmer from there with the likes of “Overtorture,” “MALLEVS MALEFICARVM,” “The Blacksmith’s Massacre” and the monumental title track that closes the album out.

But as you can see from the passage above, there is a literate quality to the material here that shows these guys aren’t the usual bunch of misogynist dolts that sadly over-populate this particular metal niche. That carries over to the music, which, though undeniably brutal is certainly not off-putting and indeed is often quite compelling.

The symphonic flourishes are used sparingly and add character, as do the piano strains and dramatic sweeps of the epic, black metally title track. On the flip-side, the balls-out grindcore blasting of “Hound Pound” turns the relative complexity of the rest of the material on its ear and delivers the album’s most viciously effective thrills.

So it seems like these guys opted to retire Cannibal Grandpa at just the right time. They pretty much nail it here, and as Bonecarver they have more of a fighting chance of getting their music out to the slam masses – such as they are.