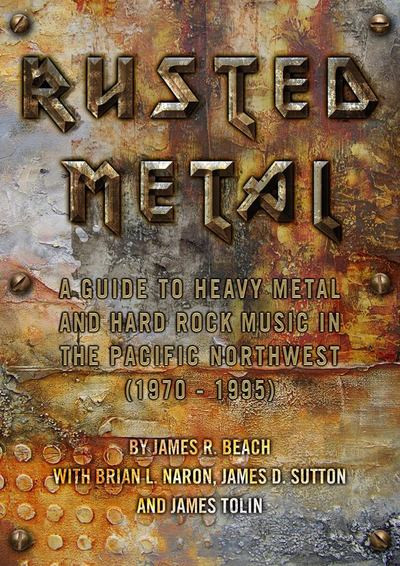 Sometimes size does matter. When it comes to Metal, bigger is better, that is the principle of excess that drives Metal to greater heights; harder, faster, meaner, etc.  As the maestro Yngwie J. Malmsteen once infamously declared,  “Less is not more. More is more!”  Author James Beach (and friends) have applied that very concept to his new book RUSTED METAL. It’s big.  Really big. I’m talking tree-hugging environmentalists are angry because this book used so much paper to make.

I don’t want to belabour the point but let’s compare some other big books about Hard Rock and Heavy Metal.  Listed by page count we have…

RUSTED METAL, with the nicely detailed and explanatory subtitle of ‘A GUIDE TO HARD ROCK AND HEAVY METAL IN THE PACIFIC NORTHWEST (1970-1995) is 902 pages long, making it one of, if not the biggest books about Hard Rock and Heavy Metal ever published.  The saying, ‘Go big or go home’ has been taken to heart by Beach.  He was not alone in this massive, multi-year endeavour. He was ably assisted by co-authors and contributors, Brian Naron, James Sutton and James Tolin.  Credit where credit is due!   (See below for more info on their most excellent company NW Metalworks.)

If you eliminate books like the aforementioned Kiss Compendium and Metalion which are collections of previously published material, not new material, then I believe RUSTED METAL stands as the second biggest book about Metal of all time. (as of early 2021)  Bragging rights!
I know you might be asking yourself, “What could Beach and co. talk about for 900 pages?”  Let me tell you!

It would almost be easier to list what is not included.  Anything and everything you could possible want to know is included. The core of the book is hundreds of band biographies.  We also get dozens and dozens of interviews with artists, managers, agents and more. There are extensive discographies, lists and descriptions of venues, a monster gig guide listing hundreds of gigs.  There is a list of fallen/deceased members of the community.  There are lots of other interesting features as well.  For example, the time that Motorhead came to town to do a ‘smash a car with sledgehammers’ for charity.  There is a long section of coverage about various long-running, regional battle of the bands contests that were held over the years. There are even description of legendary parties and dances that fall into the category of ‘you had to be there’.  All of it is presented in loving detail and enthusiasm. It is a deep, deep dive.

Visually the book is impressive as well.  Although in black and white there are over a thousand images; flyers, gig posters, record covers, pictures of bands, record contracts, photos of venues and more. There are always fans who keep those old souvenirs and they have all been compiled for our pleasure and reference. There is always something to look at.

I’m going to make a confession.  I’ve reviewed over 530 books about Hard Rock and Heavy Metal for this site and this is one of the only ones where I did NOT read every single word before writing my review!   It’s too big!

Do I really need to know that on February 22,1992 Forced Entry played with Drophammer and Caustic Thought at the OK Hotel in Seattle?  Or that a sandwich shop is now standing where the Astairs club in Olympia, Washington used to be on East 5th Street?  Maybe not immediately but if I ever need or want to, it is all here.  The attention to detail is staggering. Mind-boggling.

Having lived in Vancouver for a number of years and actively followed the underground for decades, I was pleasantly surprised how much material I was familiar with, but even so the amount of information is staggering. Almost overwhelming.  This is more of a ultimate reference guide that sits in a University library rather than a light, breezy, “I’m going to sit in a hammock on the tropical beach on vacation and enjoy this entire Rock Star biography in one day.” type book.

Now, having said that, who would want to actually buy this behemoth?  Well, pretty much everyone should because you get exclusive in-depth interviews with members of dozens of bands including members of Fifth Angel, Coven, Malice, Metal Church, Nevermore, TKO, Q5 and the manager of Queensryche. The interviews are worth the price alone.

Even if you are a causal, dare I say, mainstream Metal kind of person, who doesn’t really care about the obscure, three track, 1988 cassette demo by rockers Pistol Moon, you will want to read the extensive biographies of the biggest bands; Metal Church, Malice, Sanctuary, Nevermore, Black n’ Blue, Thor, TKO, Fifth Angel and of course Queensryche.

If you are a bit more of an experienced and/or curious Metalhead and maybe recall bands that made an impact outside of the Pacific Northwest, bands such as Mace, Heir Apparent, Forced Entry, Gargoyle and Bitter End. RUSTED METAL is for you.

Maybe you were there on the ground floor and remember buying Aragathor demo tapes in Vancouver or seeing Ruff Toiz play at Jocko’s Tavern in the town of Renton, Washington because your cousin was in the band. RUSTED METAL is for you.

RUSTED METAL is the most detailed study, (or love-letter as Beach puts it in his introduction) of a regional scene I’ve ever seen. Janne Stark’s 1996/2002 ground-breaking, two volume, 841 page, hard cover, history of Swedish Hard Rock and Heavy Metal comes close, but is not as detailed.

NW METALWORX MUSIC is a company formed by three northwest fans of the music scene (James R. Beach, Brian Naron and J.D. Sutton) who grew up there. We are reissuing and issuing LPs of great NW Heavy Metal and Hard Rock bands from the 70s – 90s along with a comprehensive book on the history of the scene. Sign up for our email newsletter to keep up on our release parties, concert events and special sales!