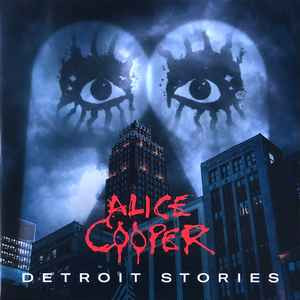 It looks like Alice is feeling nostalgic.  Following up quickly on the heels of the BREADCRUMBS covers EP in late 2019, Alice has dropped his 21st solo album DETROIT STORIES.

I day nostalgic because as legend has it, Detroit was one of, if not the first American city to embrace Alice back in the early 70’s.  The nostalgia is two-fold as Alice and crew have crafted a modern day album that is musically speaking a throwback to the origins of Rock and Roll.

Alice is a musical chameleon, from the 80’s glam era of CONSTRICTOR to the Metal-industrial sounds of BRUTAL PLANET to a string of garage rock albums in the 2000’s, he always adapts.   However, I think deep down Alice’s heart is old school 50’s and 60’s Rock and Roll.  This sonic sentiment comes to the fore on DETROIT STORIES.  Musically this is all over the map in a good way; Beatles, Elvis, Do-wop,  crunchy guitars, swing, shuffle, big band, keyboards & cowbell, and somehow he makes it his own.

I could over-analyze this thing to death… (Erin at the helm, 15 short songs less than an hour long, four cover tunes, four repeats from the BREADCRUMBS EP) but overanalyzing that would defeat the spirit of rock and roll.  The band of not-so young guns is firing on all cylinders, his voice is indestructible and the wry, observational humour of the lyrics is fully intact.  Bolstered by top-notch production, this album is superb.  Here is the clincher.  It ain’t heavy.

The debate about if Alice is Metal or not still goes on but DETROIT STORIES will not favour the folks who want to put Alice in a little box in the Metal camp. It is a classic Rock album; not even a hard Rock album, and miles from Metal.   This might bother some people but not me.  Many of his albums were not ‘heavy’ in the conventional sense, so long time Alice fans should not be surprised.  Those same fans will note that many if Alice’s albums come in pairs. This is a direct continuation of PARANORMAL with swing and groove, elements noticeably absent on other Alice albums.

One thing worries me.  Could this be the last Alice album?  People have been saying that for years but this time it seems more plausible.   Alice Cooper is immortal but Mr. Furnier is not. Comments about his age aside, this seems like he perfect time to go out on top.  A #1 album and sonically speaking a return to the roots of Rock music.  The circle is complete and I feel instead of fading away Alice would live by the ol’ show biz maxim, Leave ‘em wanting more.

Our Love Will Change The World

Drunk And In Love

Hanging By A Thread (Album Version)

Shut Up And Rock