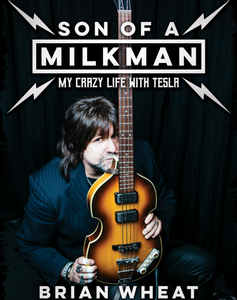 I’ve read a lot of rock star autobiographies and this is one of them!  On a more serious note, I don’t know why but I came away feeling slightly…underwhelmed after reading SON OF A MILKMAN.

Brian Wheat, bassist, founder, spiritual leader and driving force behind multi-platinum hard rock act, Telsa has written his autobiography. When I first heard about this book I was very excited as I am a life-long fan of the band, well, since the debut album came out!  It puzzles me that I felt underwhelmed but maybe my expectations were too high because there is nothing wrong with this book, at all.

I am writing this review from a digital promo copy so I can’t speak to the quality of the actual book; photos, layout, design or any of those features, but I’m sure based on Post Hill’s track record that it is pretty decent.

Sporting one of the better titles for a rock autobiography I’ve read, SON OF A MILKMAN is a compact 200 pages with a Foreword by Joe Elliot of Def Leppard and a Afterword by famed photographer, Ross Halfin.  It is a quick easy read and Wheat was assisted by Chris Epting.

It is a big name publisher and accordingly it follows a time-worn formula.  We start with the ‘hook’.  It is so cliché but I understand exactly why books are structured like this.  The cover and title are designed to attract the eye.  Then if the publisher/author is lucky enough to have the customer pick up the book in the store, sometimes they flip past the credits and start reading the brief celebrity endorsement (in this case Joe Elliot) and then the Prologue which has ‘the hook’.  It is usually a dramatic incident or exciting tale…always a cliff-hanger….a tale that engages the reader.  The customer knows they can’t stand the store and read the whole book so they have to buy it if they want to know what happens. It is like a commercial.  I fully understand the logic behind it, but it still bugs me.  In this case the hook is that Wheat is speaking about his near-suicidal depression while on tour with Def Leppard in Canada in 2019.  I’m hooked!  Then as with every other book we jump back to the very beginning.. Chapter One . “I was born in…” etc, etc etc… the son of a milkman.  Then you have to read the entire book before the hook is concluded.  It is formulaic, but it works so I can’t be too critical.

We follow his life chronologically, a typical California kid, a journey as he discovers girls, booze, sports and the usual stuff and eventually gets bitten by the rock and roll bug. He takes us on a journey that follows the band, City Kidd back then, who slogged it out on the bar circuit for many years, kind of like Night Ranger, Quiet Riot, Van Halen Y&T and a handful of other California bands who paid their dues.  They were not an overnight sensation although it seemed like it to fans like me, a kid in Canada, but suddenly there is this big-time band with videos on TV, but the back-story is quite extensive and it was very interesting to read.

A feature of the book I really enjoyed is that Wheat avoided the #1 MAJOR pitfall of almost every rock biography and autobiography out there…he did not stop telling the story after the glory years had ended.   He spends just as much time, if not more, taking about AFTER the fall in 1994 the bands break-up and almost a decade of inactivity.  We thankfully get the full story behind all the later era albums, the reformation, the tours, the recording process, the money, the fights, all of it is detailed.  I found this part the most interesting, partially because they were not in the public eye as much.  I enjoyed learning about the REAL TO REEL sessions for example.  Wheat has a keen eye for technical industry detail and I learned a lot.

Wheat, unlike most of the other members of the band, was not a drug addict, except for a lost-weekend, which became a lost year until he got his act together. That meant he has the clarity to recall many, many important details about the development and history of Tesla. This is not a sordid tell-all, there are a few tales of sex and drugs and rock and roll attitude but it is downplayed, not sensationalized.  Tesla never emphasized that aspect, unlike a Poison or Warrant or whoever.

Another fine feature of this autobiography is that Wheat strikes the perfect balance between reading about Tesla, which is truthfully the draw of this sort of book, and his own life.  I’ve read rockstar autobiographies that only talk about ‘the band’ and you learn virtually nothing about the author, and conversely, books where the author gives you virtually nothing about ‘the band’.  Wheat has that perfect balance, we get to know about him, his life-story, his family, his hobbies (photography, painting etc) as well as tons of cool detail about Telsa.

Wheat is a heart on the sleeve kind of guy, he tells it like it is, (as he sees it) and is unapologetic. Thankfully this is not tainted by ego or exaggeration but he freely admits that he is not that great of a musician or song-writer or even all that friendly or social, and that his band mates, especially Jeff and Tommy have the talent. He admits to being an asshole but he had to be to keep the dysfunctional band from imploding, many, many times. I never realized how integral he has been to the bands success over the years, managing, producing, and generally trying to steer the ship.   Wheat also talks a lot of about his health, and his other long-term band SoulMotor.  He seems pretty good with his money, too, owning a warehouse, a recording studio and some properties in California, Texas and New York!

I am not suggesting that Wheat perspective is one-sided, he seems very balanced, but I would really like to read a counter-point from another member of the band one day. Just to compare.  I’m surprised how many fist-fights these guys had, not the image I had of Tesla!

Maybe that is the initial point I made about being slightly underwhelmed or deflated.  I held (still do hold) the band in the highest regard, except now, I have had a peek behind the curtain and caught a glimpse of band that at times was full of dysfunctional addicts who physically fought a lot. The part about Wheat, during a cocaine binge, was enjoying beating a hooker/girlfriend who was into S&M, made me cringe.  I’m not a prude but I expected that type of story from Motley Crue in THE DIRT not from Brian Wheat in Tesla!

Ultimately, they are human so maybe this book took a tiny bit of the shine off the band for me. Even Ross Halfin, who writes the Afterword says he didn’t really like anyone in the band except Wheat!  I must be naïve to think it was all roses; five rocking buddies (basically the same line up for almost four decades…1984 to now) who never fought or had problems or divorces or any drama!   Wheat ends on a very supportive high note with encouraging words for those struggling with mental health issues and depression to seek help and kind words to let them know they are not alone. It was a class move to end the book that way.

I’m not sure what I was expecting but I fully admit I had a very pleasant time reading SON OF A MILKMAN.  I put on the last four Tesla studio albums (INTO THE NOW, FOREVERMORE, SIMPLICTY and SHOCK) in the background and visited those fine records again, instead of the old classic first five ‘platinum era’  records from my youth.  Tesla is the perfect soundtrack to this fantastic and long-overdue and insightful book.