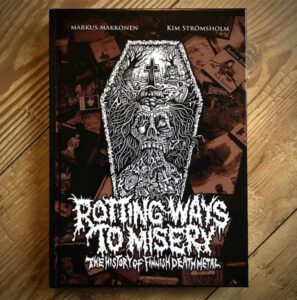 I really admire and appreciate the people who are heavily immersed in a music scene to take time to share their wisdom, knowledge and insight.  Two such gentlemen, Markus Makkonen and Kim Stromsholm (and to a lesser degree an honourable mention to ex-Metal-Rules.com scribe, Luxi Lahtinen) have collaborated to create the definitive look at the early days of Finnish Death Metal.

ROTTING WAYS TO MISERY-The Story OF Finnish Death Metal was published by Crypt Publications the publishing arm of the Cult Never Dies empire.  As usual they do a fine job in terms of production.  This hardcover book is about 300 pages long and has quite a few nice extra features.  It is compact but the font seems to be a bit smaller so there really is a ton of information.

ROTTING WAYS, named after the Sentenced demo, has a nice intro, a handy map of Finland to reference all the small towns where bands came from, credits, a recommended playlist, and a list of influential bands and brief biographies of the authors.

Visually the book is very appealing.  The whole artistic theme is old-school black and white Death Metal demo style art.   There are lots of sketches, pictures of demos, flyers, and tons of snapshots of very young men standing around in the forest.  There is even a really neat two-page spread which is a artistic collage of many images taken from classic Death Metal albums and demos and put into one big picture.  You can have fun trying to identify all the bits and pieces! 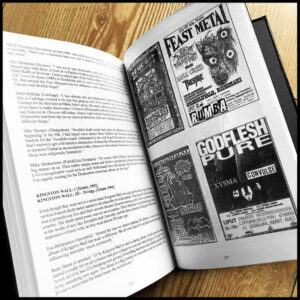 The script itself is logically presented.  The 28 chapter book starts with an in-depth definition of Death Metal from Finland and what makes it unique from, for example, Swedish or American Death Metal. Then there is an overview of the evolution of the scene in Finland, evolving from classic Metal to Thrash into Death Metal in fairly rapid succession.   The book essentially covers from 1989 to about 1994/5. There are several chapters of insightful and in-depth analysis of the scene; key players, important bands, important radio shows like, Metalliliitto  (broadcast nationally from 1988-2006) and record stores like Comeback Records in Turku.

Next we get into detailed histories of the key bands; you know al the names, Amorphis, Sentenced, Demilich, Thergothon and many more about 14 in all.  Each get a chapter with tons of quotes, first hand interviews with the musicians conducted specifically for the book.  There are also several chapters dedicated to lesser-known bands and we follow the scene chronological rise and fall of the scene. Lastly we warp up with a very brief honourable mention of many bands that have continued to wave the flag of Death.  There is certainly enough material for a second book and that was maybe even hinted at. ROTTING WAYS is incredibly detailed and comprehensive.

What I really enjoyed is the authors held the bands in high-regard but the books was not just fan-boys worshipping the bands and filled with teary-eyed nostalgia. It certainly was a special time, again roughly 89-94, and it gets full credit.   I really enjoyed reading the book.  I realized I knew more about the scene than I thought, owning albums by lesser-known bands like Mordicus, Scum and Unholy, but also at the same time realizing how little I knew about the scene, the regional differences and the personalities behind the creation of the art.   It is one thing to own an album but to hear the interesting stories behind it, really bring it to life.

ROTTING WAYS is simply superb.   Yes, it is a pretty small niche, a detailed examination of a brief and long-gone era but one that still resonates today with Death Metal fans around the globe. What made this period of Finnish Death Metal so special and unique that it still lasts to this day? Well, you will have to read the book to find out!