Germany’s Sarkrista came across my radar with their 2017 release SUMMONERS OF THE SERPENTS WRATH. Their raw and furious approach to black metal is what stuck out with me. Fierce melodic tremolos with some blast beats thrown in with black metal shrieks. Their sound is actually reminiscent of the Finnish scene….almost to the point that I automatically assumed they were Finnish until I learned otherwise. So I got excited when their new full length, SWORN TO PROFOUND HERESY, landed in my inbox. Formed in 2011 they have multiple EPs and Splits under their belt but this is only their third full length. After hearing the previous effort and finding it to be some really well executed black metal, I was hoping this effort would continue that same approach to black metal and thankfully they have.

After a brief intro to build you up for the fury that is to come, the title track bursts forth with blasts and some serious tremolo riffs. As mentioned before the vocals are fierce shrieks with some more old school Cronos type snarls in there as well. The song abruptly ends and “Lair of Cursed Remains” picks it right up again. Once again we have fast tremolo riffing and blasts but the riffs have just enough melody for the hook. The time change halfway through was classy as well. Another thing that makes this an enjoyable album is the production. This is no lo-fi affair. All instruments are clear. The bass is slightly buried but that also adds to the atmosphere of the album. “Ablazing Ritual Torches” is another scorcher, and possibly my favorite on the album. This song actually has some very interesting riffing and time signatures going on almost tapping into some progressive elements.

Once again the Finnish similarities show themselves. “Conjuring the Profane Fury” has the speed as well as the melody in the barrage of tremolos that drive the song that reminds me a bit of Horna’s last output. Then on it’s heels we have “Destroyer of the Sun.” This is a midpaced song that truly stands out due to it’s approach and execution. The song actually has a slight black and roll sound that puts you in mind of Vreid or modern Darkthrone, especially right after the midway point of the song. The only misstep here is the song length, they could have ended it at the four and half minute mark but let it go another two minutes or so and it kind of fell flat. Still, a very interesting song. The album closer is another that goes into that direction and, as with a lot of the Finnish bands, the album closer is about two thirds the song and about one third an ambient outro. Once again, if you did not look for yourself, you would swear this band was from the Finnish scene.

Sarkrista has been rather consistent in their output and I do not see that changing any time soon.  With SWORN TO PROFOUND HERESY, Sarkrista continue on their mission to bring you unrelenting quality black metal. In fact, this album is proof positive that you do not have to reinvent the wheel to be creative and relevant. This album will, most likely, become one of my favorite black metal albums to come out in the past few years just in how they approach the art. You would do well to acquire this album. 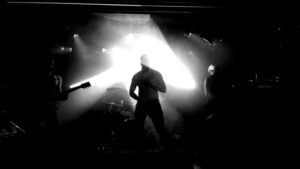 Track Listing:
1. Intro
2. Sworn to Profound Heresy
3. Lair of Cursed Remains
4. Ablazing Ritual Torches
5. The Chosen Ones of Satan
6. Conjuring the Profane Fury
7. Destroyer of the Sun
8. The Beast Reborn
9. A Whisper From Forgotten Coffins