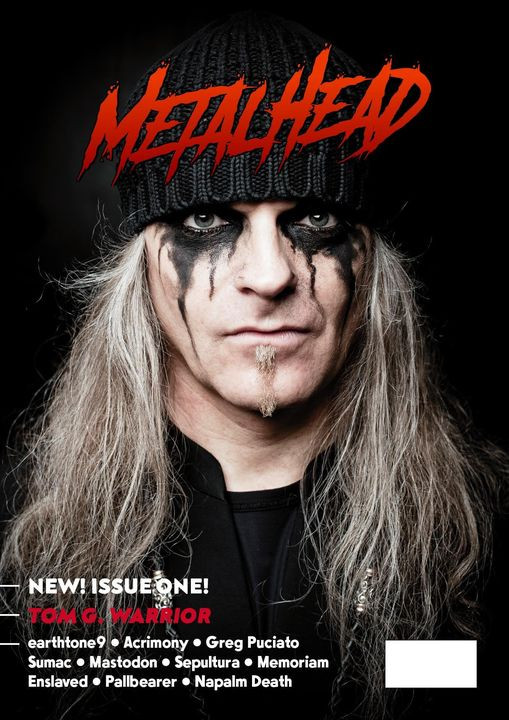 Are you crazy?  Nobody starts a print magazine these days.  Just kidding!   Congratulations on your new venture!   However, there is a serious question in there.   With the market for Metal magazine collapsing about 10 years ago, how did you gauge that there was room for a new Metal magazine?

Thank you! I guess it may seem that way, but my desire to start a new print only magazine was based on multiple reasons.
I love print magazines – in the same way I like vinyl and CDs. I do digest digital music and similarly, I digest online journalism.

However, there’s nothing better than looking at a record/ CD while listening to it. Digesting the artwork, the lyrics, the thank you lists, the recording credits. Taking the time to enjoy all aspects of the art is really important to me. As a kid that’s how I devoured my music and I still love that experience now.

I read on-line stories/ interviews on various websites –  sites like yours are great – announcements, reviews that are timely and relevant, interviews – perfect for the modern, fast-paced world.  Then there is the issue of churnalism – headlines, clickbait – it’s everywhere. But it’s not for me at this point in my life.  My idea was based on a desire to read interesting articles with bands/ artists in an honest way without the pressure of ‘hype’ and sticking religiously to release schedules.

I’ve worked on magazines most of my life, so I wanted to use that experience but create something that I believed in with no compromises.
I’ve seen the market collapsing (and worked in it, while it’s been doing so) but I hope the fresh approach will be inspiring.  There’s room for something new and different I believe. I want Metalhead to be read and live on people’s shelves or coffee tables, not thrown into the recycling once it’s been read.

On a related note, the magazine industry in England has always been consistently stronger and more resilient than the North American market.   Why do you think this is?

Because the UK is the home of heavy metal 😉

When did you initially come up with the idea?   Which also leads me to ask if you would tell us a bit about your own history as a journalist working for other magazines.

I had been working on Iron Fist (killer heavy metal magazine) for a few years and that took a little break (it’s now back btw and Issue 24 will be out in March) … and frankly I missed doing a magazine. More so, I really missed interviewing bands/ artists.

I had about six months of being sad about IF and then I just figured I should do my own thing. Initially I went to see another music magazine publisher (Summer 2019) but that didn’t work out on a creative front, so I decided to go it alone in March 2020. The pandemic hit and life went a bit weird but Summer 2020 came and I kickstarted the plans.

I started a cut and paste zine called Undergroove in the late 90s while I worked on a local newspaper; then I joined Metal Hammer as a staff writer. From there I moved to Rock Sound, a quick stint at Kerrang!, and then I moved to Terrorizer before joining Iron Fist.

I’ve been a journalist for my entire life but sometimes you end up commissioning more than writing features – Metalhead was also about wanting to write again and discover the stories behind awesome art and music.

From concept to when the first issue rolled off the printing press, how long did it take?

Planning a magazine takes some time as you have to set up all the interviews, plot pagination and so on. I have a day job too, so this process is spread over a few months. Issue #1 was quite straightforward to plan and to be honest with the reaction being so positive, it’s been exciting to already plan for future issues.

How did you decide on the title Metalhead?

A bit of brainstorming with myself and a few close friends. I think it reflects the vibe of the content.

I noticed you made some bold and unconventional choices in terms of layout and design and style.  I’m assuming this was deliberate to avoid comparisons to the bi-weekly/monthly glossies that populate the racks?

It’s the vibe I wanted to create – clean and aesthetically pleasing on the eye. I wanted to create something that looked special (like the music and the artists featured). If it’s about celebrating cool music, why should it look scrappy? I don’t do reviews as it would be pointless in a quarterly magazine when the internet exists. I didn’t want it to feel glossy or throwaway.

I’ve worked on titles where it feels like everything is crammed in and totally led by what the industry dictates i.e. release schedules and adverts.
I felt it was important for me to make the features breathe. And yes, it goes back to wanting to start a magazine in 2020/2021 – why replicate what’s already out there?

I understand that very few writers get paid these days. How was the process of recruiting talent?

I think writers should get paid … even if it’s a small amount. There are some new titles that have surfaced that don’t pay. Sadly I have been on titles that haven’t paid what’s owing to writers (and myself) through bad management – which is even worse. It’s important to me to ensure that writers are paid rather than “exposure and experience”.

The Metalhead team consists of like-minded people I have known through my career, who love music, write great copy and share similar appreciations of life. Long may it continue! I hope to find new writers too as the magazine develops.

For issue #1 you had unlimited choice of people to talk to.  How did you come up with your stories/subjects?  Were there any people you approached who were not interested in talking to a start up?

I just want to write about bands/ artists who I love, who are cool and interesting. I am thankful that everyone I approached for Issue #1 was happy to chat to a new magazine. So far the same goes for #2 and #3.

Please visit metalheadmag.bigcartel.com/   You can order single issues or subscribe or be a supporter subscriber and get bonus stuff too!

Can we have a sneak peek of content for issue #2?

Cult Of Luna and Memoriam will be appearing – along with many others! The pagination has increased on #2 too! Long live print magazines!

Thank you – and cheers for your support!