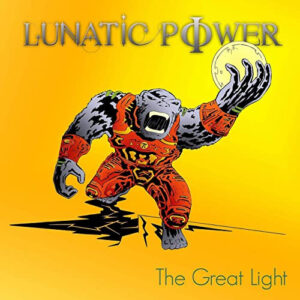 I’m a little late with this review but better Kate than never!  Back in October of 2020, the French Metal band Lunatic Power released their sophomore effort, THE GREAT LIGHT.

The very first thing that caught my eye was the bright yellow and unconventional artwork.  It is a depiction of some sort of Sci-fi primate drawn in the style of the old Marvel comics artist Jack Kirby.   The cover art reminds me of something Slough Feg might do,  even if it is just the monkey connection.

Also of note are the song titles. Titles like ‘The Shadow of the Old Dolphin Fisherman’, ‘Funambulist’ and  ‘The Fool Who Plays Near the Steep Cliff Will Not Become Wise’  immediately caught my eye and piqued my curiosity. Thus wasn’t going to be your run-of-the-mill Dungeons and Dragons inspired Power Metal band!

Lunatic Power were founded back in 2014 and have decided that the independent route is best for them.  Led by founder and guitarist Jolly Roger (which I suspect might not be his real name) this trio has a lot going for them.

The album starts with 3,141592653 a slightly ominous intro some spoken word sections.  You may recognize that number as the first several digits of Pi, what mathematicians refer to as an irrational number. Already we can see this band is lyrically a little deeper.

With a band name like LUNATIC POWER you might think they would be a hyper-kinetic speed Metal type project but on THE GREAT LIGHT they are slightly more subdued; just a fine  display of energetic classic Heavy Metal.

Vocalist and Bassist ‘Klod’ sings in a mid-range to lower register which is a refreshing change from many of ultra high pitched singers.   He has had a good tone and delivery and a hint of grit.

The songs drive along with good energy and overall they are very traditional and remind me a bit of bands like Grand Magus but without all the Nordic trappings. The drums pound along with occasional flourishes of double-kick giving the songs a nice momentum.  Not everything is the same pace, Jolly Roger demonstrates his talent for not overplaying with a slower, more melancholic solo spot at the opening of ‘Fight’.  However, in several spots in the album he shines with some pretty ripping solos.

THE GREAT LIGHT goes from strength to strength without solely relying flash or flair.   It could fit nicely in the USPM genre. A combination of good production, good songs and a workman-like dedication to the purity of Metal make this album a real winner.

3. The Lawyer of the Grace

6. Olympe and the Mount of Light

7. The Fool Who Plays Near the Steep Cliff Will Not Become Wise

11. The Shadow of the Old Dolphin Fisherman