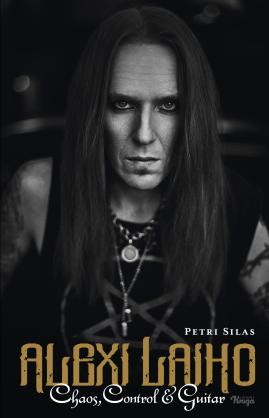 In very early 2021 (Jan 4th) the world discovered that Alexi Laiho, guitarist and founder of Children Of Bodom had passed away.   I personally was not shocked, very disappointed yes, but not shocked.   I saw COB on the HEXED tour in 2019 and back then Laiho looked very skinny, pale, gaunt, sick and tired. Let’s not mince words. He looked like a dying addict and I was very sad.   COB broke up  nine months later and I predicted that things could get much worse for the man who created an amazing Metallic empire.  They obviously did.

Back in the spring of 2019 Laiho and author Petri Silas co-wrote ‘KITARA, KAAOS & KONTROLLI, the autobiography of Alexi Laiho.  It was timed this way to commemorate Laiho’s 40th birthday.  I always wanted to read it but it was in Finnish only.  The band is so popular I knew it would just be a matter of time before it was translated into English.

Eventually, it was released in English with the title, CHAOS, CONTROL AND GUITAR.   Somehow, I missed the fact that it had been translated and updated and re-released in April of 2020!   The day he died I was surprised to find out the translated version had already been released and I also knew this was probably a pretty limited print-run.  I immediately bought a copy in support, and as a librarian of Metal, knowing that this book would become pretty hard to find.   I hope that does not seem too opportunistic of me, but I did want this book to my library, not to capitalize on his unfortunate passing.   The translated title doesn’t make perfect sense, it should be GUITARS; CHAOS AND CONTROL to more accurately reflect the content, his love affair with the guitar and the chaos and control of his life and music.

I will say, unfortunately, this was VERY expensive to obtain. With the exchange rate, taxes, import fees and shipping this simple paperback cost me $80.00 Cdn dollars!   The book is just under 300 pages long and printed on lower quality paper. There are not too many extras features; in terms of presentation, CHAOS, CONTROL AND GUITAR is pretty low-key.  I’m surprised there is not a celebrity foreword or endorsements but there are 16-pages of colour photos printed on glossy plates in the center of the book. The photos are a nice mix of formal promo band shots, live shots and never-before-seen candid photos.

In the introduction to my review of the recent Snowy Shaw autobiography, THE BOOK OF HEAVY METAL, I wrote an extensive piece on how there are very few  Metal artists from mainland Europe have written an autobiography.  I won’t repeat all of it here but the short version is that less than 12 people have written their autobiography, and Alexi Laiho is one of those select few. It is very interesting to read a book about Heavy Metal from a European perspective.

Laiho is an engaging, conversational style storyteller.  He grew up very happy in a stable, middle-class family in Finland and like many kids, over time a rebellious streak appeared making it hard for him to perform in school. Laiho admits he was never much of a reader or writer (preferring films, video games and skateboarding), so I suspect that ghost-writer Silas had a heavy hand in refining this story.   Music became his calling and at a very young age he was enrolled in a music conservatory and by the time he was in his late teens he had found his calling and become a professional musician.

From there we follow his career in COB, album-by-album across 20 more years. One element of this book I really enjoyed was that it was not your quintessential sex, drugs, rock and roll story.  He talked much less about himself and more about the band, the music and the industry. I found that refreshing.  I enjoyed learning about the band dynamics, and how they navigated their way through the industry, record contracts, managers, endorsement deals, recording albums, building a studio and  the strain of being a touring band that did not rely on chart positions or albums sales.

He kept the stories about his dalliances with women and drugs to a bare minimum, seemingly loyal and content in his personal life with a series of longer-term relationships.  He also shies aware from talk about his self-harm (cutting) and alcoholism, openly stating he did not want to talk about his stint(s) in rehab because he feels his inability to manage his own addictions as a personal failure.  I do not want to say the story is totally sanitized but there is not much details on the dirt, Laiho taking a bit of the classy high road.  However, Laiho packed in more living in 20 years than most people do in an entire lifetime and perhaps the relentless, reckless pace and the skeletons in his closet contributed to his ultimate downfall.  COB really has a solid legacy; 10 studio albums, a stable line-up with four of the same five guys (Alexi, Henkka, Janne and Jaska), gold albums, and world tours, spread across 22 years, almost to the day, when they officially called it quits on Dec 15th, 2019. Quite remarkable.

The English version adds a very brief post-script from Laiho, (written in March, 2020) where he is resting comfortably at home with his family in Australia, with talk of settling down and hints of things to come with his new project Bodom After Midnight.   Obviously, the intervening months between March and December 2020 were not kind to him as it was publically announced that he had passed away at home in Helsinki in late December of 2020.  The second last sentence in his autobiography is somewhat prophetic. He says,  “But it’s only going to be ‘game over’ when I die.” (p. 286).

I had the pleasure of meeting Laiho once very, very briefly in Calgary, Alberta in 2011 just after I had interviewed C.O.B. drummer, Jaska Raatikainen for Metal-Rules.com.   Laiho was polite, courteous and took a few moments backstage to say hello. He will be missed and I really enjoyed CHAOS, CONTROL & GUITAR, a fine testament of his legacy.