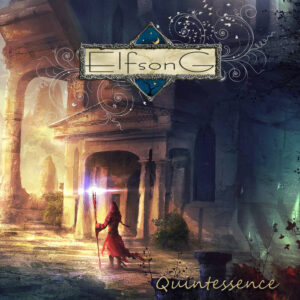 It never ceases to impress and amaze with depth and breadth of Metal talent around the world.  Just when I feel like after bring a fan for 40 years, I’ve heard of a good chunk of the bands out there, a veteran band will still pop up that I’ve never heard of, in this instance it is Elfsong.   Maybe I’m just behind the times.

Elfsong has been around for over a decade and perhaps I can be forgiven for not hearing this band yet as they are from Hungary and until recently have had limited distribution and have only sung in their native tongue.

Formed in 2010 this symphonic Power Metal band has churned out three albums in quick succession, albums in 2012, 2103 and 2015 before taking a bit of a break.  This year, (2021) they have returned with not one but two albums.  The first album released in 2021 is their fourth full-length studio album called ENCYCLOPEDIA NOVA CREATURA.  The one we are reviewing today is called QUINTESSENCE.

QUNINTESSENCE is the band’s first compilation and better yet all the songs are now sung in English.  This collection takes three cuts from their sophomore effort ADVENTURES OF THE NORTHERN SEA (2013) and two songs from TALES OF THE LATERN FOLK (2015).  It also takes four tracks from the brand new album, but oddly enough not a single song off the debut.   At nine songs and 38 minutes it would have been great to take at least two more songs from the debut.

The quintet have been pretty stable over the years and that cohesion show as these guys are world-class.  Production, performance, individual talent; Elfsong has it all.

Elfsong, despite the band name is not as mellow as you might think. They play a solid kind of traditional Metal with some orchestral and symphonic elements.   There are also some little folk and choral elements interwoven as well The pace is usually quick but there are certainly enough tempo-changes to keep it interesting. The songs are pretty compact, usually in the four to minute range and there are many additional elements like sound-effects and narration.  The lyrics are also epic as the band tends to do conceptual pieces weaving tales of fantasy adventure.  The vocals Daniel of are very strong he has good range and power and a triumphant delivery.   There are many bands doing this style and Elfsong is as good as any of them.

I’m late to the Elfsong party but better late than never.  Normally I would not rate a simple ‘best of’ collection so highly, especially one without any new, rare or unreleased material, but since this is my first experience with the band I’m waiving those considerations. I feel Elfsong could easily challenge Wisdom as one of the best Hungarian Metal bands and I’m pleased to try and help bring more exposure to this superb band.