After four years of incubation, Ablaze My Sorrow announces their triumphant return with a new album. The fifth full length, entitled Among Ashes and Monoliths, introduce new vocalist Jonas Udd, whose aggressive rasp fits the passionate band to perfection. The other four members return intact from prior releases. Still fresh sounding in 2020, the band presents us with an opus of impassioned self-reflection, tackling themes of depression and self-worth. Across twelve tracks, the band speaks catharsis from experience, and the truth of their words is evident. Including speed/thrash metal energy, the veteran group, this time, brought more dynamism into their crafts. An underrated gem, the Falkenberg quintet once again let their emotional style of Melodic Death Metal do the talking for them.

Opening this album is the first track My Sorrow. With the use of a string section and heavy guitar/drum instrumentals, this track doesn’t hold back on any of the death metal elements and gives Jonas Udd a powerful welcoming. This tone carries over well into the title track Among Ashes and Monoliths as you are thrown into the foray of action with heavy drum patterns and aggressive guitar playing.

Black Waters, however, takes a calmer approach early on in the album as from 0:15, cleaner vocals from Udd and light cymbal hits from Kribensten introduced which creates a different but pleasant tone for the track. Despite this, the familiar aggressive tones are reintroduced around 0:55 but maintained the calm nature of the track.

Throughout the album, I did find quite a few of the tracks were similar to each other such as At the Graves of Giants (very strong with death metal with the sprinkling of thrash in parts), Nonextence, Dark Chasms, and Frihet Framför Feghet. However, each track was an excellent listen in its own right and just encouraged more of Ablaze My Sorrow’s talent.

One track I particularly enjoyed was the longest, Her Cold Embrace. It is a slower track in comparison to the rest of the album, but within it are some great vocal melodies, in particular the addition of softer, female vocals in sections. This gave the track more power and ambience to it.

Despite this being my first time discovering Ablaze My Sorrow, it has certainly given me enough reason to explore the rest of their discography as well as explore the wonders of Melodic Death Metal!

CD, cassette, and digital formats will drop on 12th February 2021 with the vinyl release will take place at a later date. 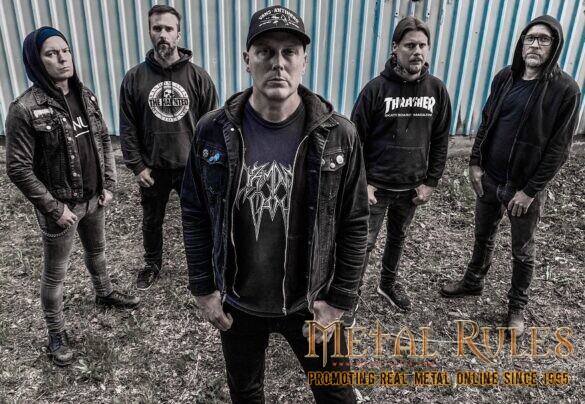