Immortal Guardian is a band created by Gabriel Guardiola, an incredible composer with the amazing ability to play the keyboard and guitar at the same time. Fortunately, his technical talent is also accompanied by an enormous compositional capacity, making Immortal Guardian one of the greatest American power metal revelations of the last five years. Although the group has existed since the distant year of 2008, it was ten years after that it released its debut album: AGE OF REVOLUTION (2018), an incredible opus that surprised locals and strangers and catapulted them to international tours.

Unlike other emerging bands that release an album every five years or more, Immortal Guardian has managed to maintain momentum and this February they will release their second album titled: PSYCHOSOMATIC, recorded in early 2020 shortly before the pandemic hit the The American continent, however, the unbeatable spirit of the band allowed them to move on and from four different cities they finished what promises to be a consecrating album.

In this new album the duo of Guardiola and Carlos Zema (voice) is repeated, who managed to write deep lyrics that only a rock could hear without immersing themselves in intense reflections. The balance between the musical level and the lyric level is very close; it’s hard to stand out one above the other, which speaks to the enormous quality that they have delivered on this new album. Justin Piedimonte (drums) and Joshua López (bass) achieved a consistent job, at the height of what the music demanded.

With this album Immortal Guardian should no longer be seen as a promising band. Not only have they shown that they have an enormous compositional quality and an elite technical level, they have also shown that they are a band that faces difficulties and that they have all the will to continue. Making a high-quality second album two years after their dazzling debut tells us about the enormous inner power these musicians have. 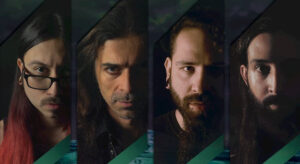