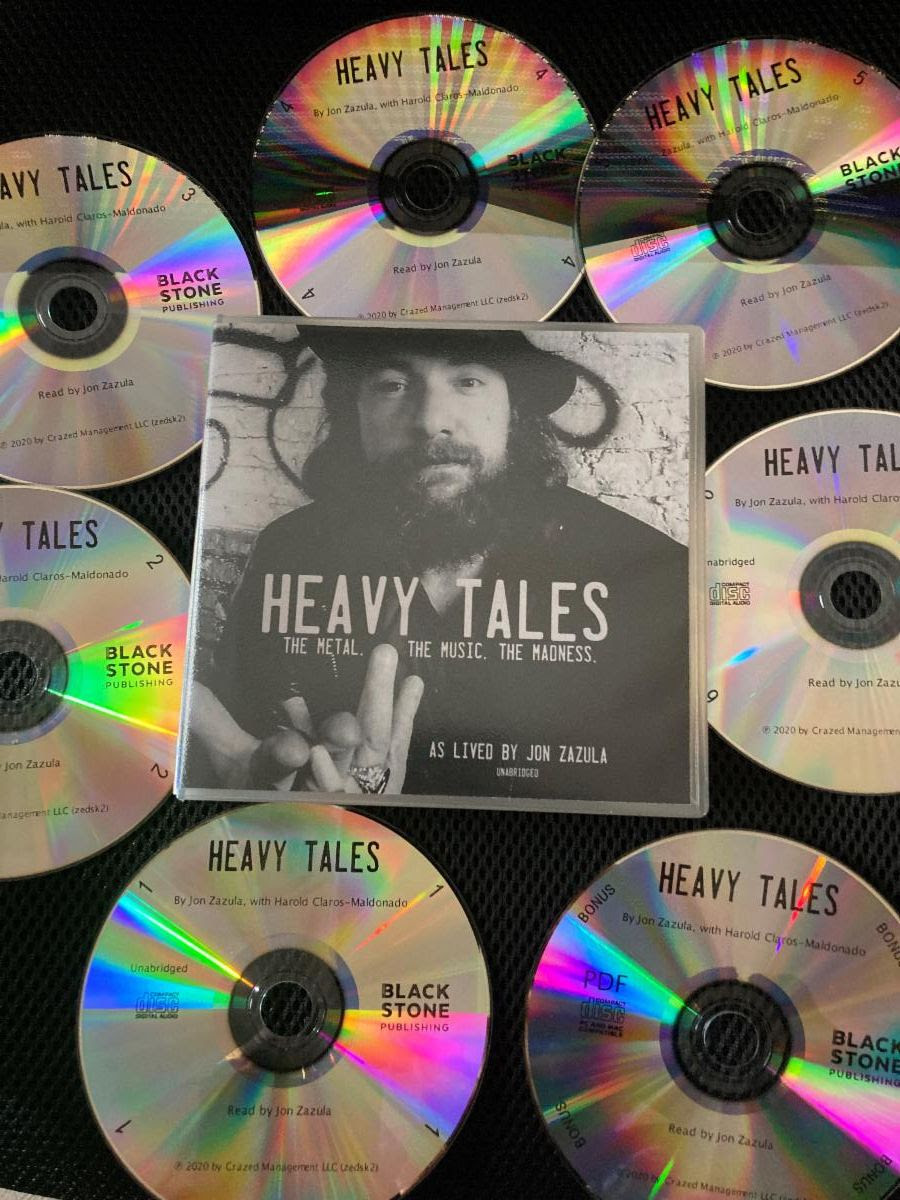 A massive seven-disc physical audio CD edition of Megaforce Records founder Jon Zazula’s acclaimed autobiography, Heavy Tales: The Metal. The Music. The Madness. As Lived by Jon Zazula, read by the author himself, is available now.

“At last, the wait is over,” Zazula says. “‘Heavy Tales’ has been out in a digital format prior but has never before been available as a seven-CD collection where not only I get to tell my story, but I get to answer over two hours of heavy questions which was taken from live radio broadcasts.”

Unlike the previous audio addition, the physically copy contains a bonus disc containing over 100 amazing photos that originally appeared in the print edition of the book. The audio CD is available in most libraries and retailers nationwide.

Released last year in physical format, Heavy Tales is the detailed, story of how Jonny Z founded legendary New Jersey-based label Megaforce Records with his wife, Marsha, and built a dynasty unmatched by others, forever changing the scope of heavy metal.

Born in 1952, Zazula began his extraordinary journey as a renegade youth who went from living on the streets of the Bronx in New York City, to later working on Wall Street, and eventually (and unexpectedly) transitioning into the music business and discovering Metallica, Anthrax and others. Today, Jonny Z remains one of the most respected names in heavy metal.

After Wall Street, Jonny Z began selling records at a flea market store in 1981 to put food on the table for his family. Dubbed Rock N’ Roll Heaven, the store eventually blossomed into a major record store that influenced the heavy metal movement as we know it today. In the winter of 1982, Jonny Z received an unexpected demo tape from unsigned underground band called Metallica. Eager and determined to have the music heard by the entire world, Jonny and Marsha founded Megaforce Records the following year and released Metallica‘s debut album, Kill ‘Em All. Through this release, Megaforce cemented its position as the de-facto music label in America for heavy metal. The bands they would go on to work with released some of the most important albums in heavy metal history, giving it its Golden Era.

The stories told in Heavy Tales were captured and compiled by Harold Claros-Maldonado, a lifelong fan of heavy metal who originally contacted the Zazulas to write a report on early Metallica. After several discussions, Zazula felt Claros-Maldonado would be the ideal partner to help him tell his story in the book.

For more information on Heavy Tales: The Metal. The Music. The Madness. As Lived by Jon Zazula, please visit www.jonzazula.com, www.facebook.com/heavytales and www.instagram.com/thejonzazula.