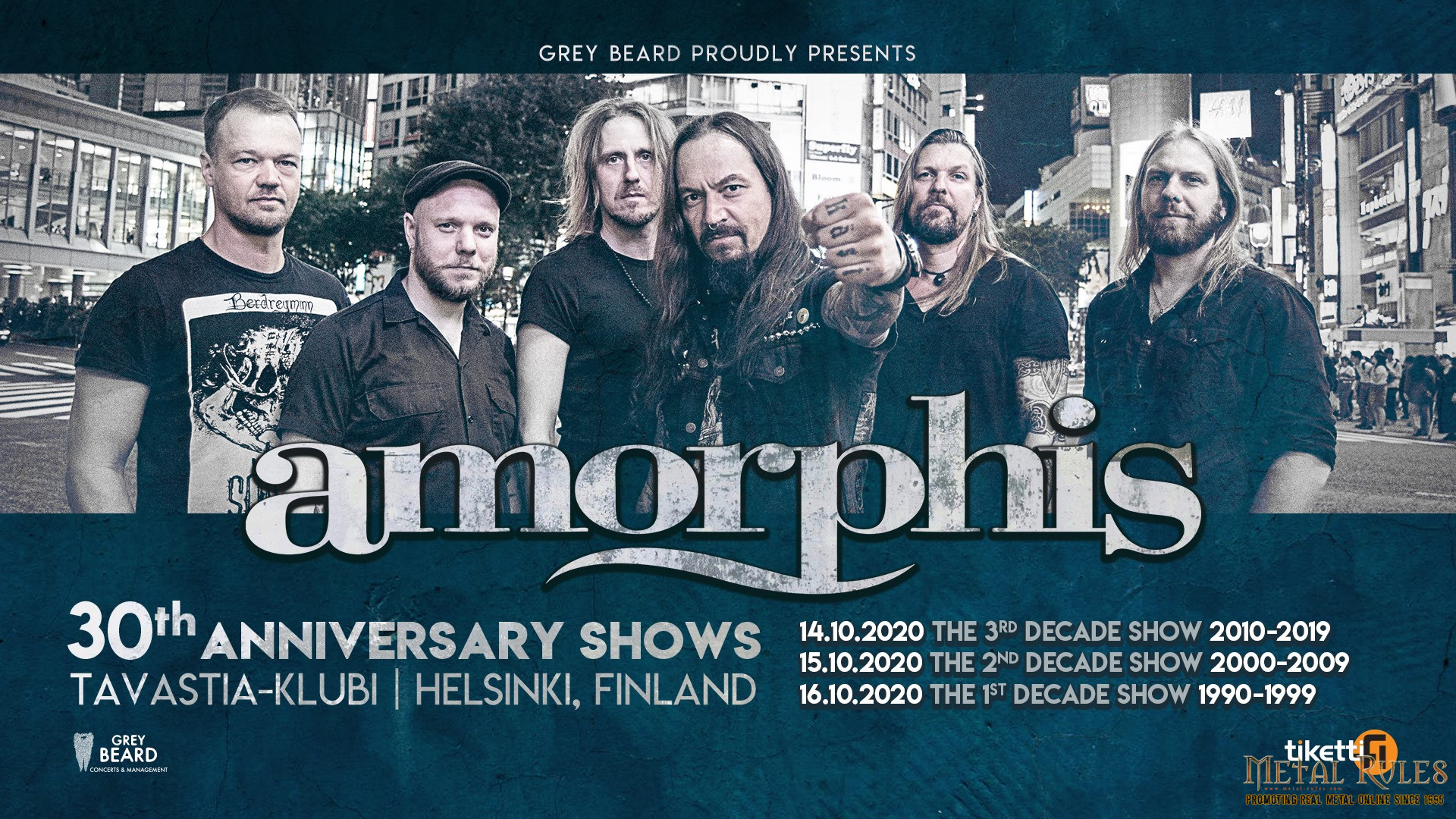 One of the most important exports of  the Finnish metal scene is definitely Amorphis.  The band started as a four-piece 30 years ago when previous bands dissolved. The band has faced up and downs and undergone quite changes a few changes in the line-up during the whole career.  To date, Amorphis has released thirteen albums and  still have survived and doing really strong and well in 2020.

The year 2020 was supposed to be a triumphal anniversary for Amorphis  celebrating  their 30th anniversary. The band had planned to celebrate the milestone of their long career earlier this year, but as it is widely known the raging pandemic turned the globe upside down and every gig and festival were either cancelled or postponed. The anniversary gigs had to be postponed to a later date. Since the whole pandemic continued resulting the North American tour with Entombed A.D and Nervosa was completely cancelled.  Nervosa kind of split up and the frontman LG Petrov of Entombed A.D. is battling against cancer at the moment.

Therefore the whole 30 anniversary was carried out in October with the mandatory restrictions. The band had to pull through six shows in three days. The first part of the show started out at 6 pm and the second one began at 10.30 pm. Even though the capacity of the legendary Tavastia club is 600, but only 300 people were allowed to enter the club.

The last day of the third day Amorphis extravaganza had been dedicated to the era 1990-1999 to cover the early day stuff up till the TUONELA album. The 60 minute set was kicked off by “Into The Hiding” and followed by “The Castaway” off from the second album Tales from the Thousand Lakes.  Vocalist Tomi Joutsen handled both the deadly growling and the melodic clean singing as usual and perfectly.

The set consisted of several Amorphis classic ones of the 90’s such as “Better Unborn”, “Drowned Maid”, “Greed”, “Black Winter Day” and of course “Exile of the Sons of Uisliu” taken from the debut album KARELIAN ISTHMUS. Both the frontman and the keyboard player left the stage leaving the original members in the mid of the set. The original four-piece did surprisingly a cover tune of Abhorrence’s “Vulgar Necrolatry” with the guitarist Tomi Koivusaari growling. Even though it was a pure nostalgic trip back to the early 90s, but it would have been superb to hear more obscure stuff from either the EP or even the first demo. The one-hour special show was concluded by “My Kantele”  crowning the prestigious show.

Frankly it could have been expected a bit more to have this blast from the past thing. Obviously due to all these restrictions and double slot in the same evening definitely brought more challenges in the performance and playing. Playing six gigs in three days was definitely a challenge of physical endurance for the band.

Even though the playing time was approximately one hour, the band succeeded in capturing the magic and mayhem feeling and the atmosphere of their early days. Even though the guitarist, Tomi Koivusaari, growled one song, his voice sounded as deep death brutal as 30 years ago.  Tomi Joutsen’s wide range of the voice from the utter death metal growling to the pure clean singing worked out with a great balance in songs.  The sounds during the whole show were splendid. The band was having fun and appeared to be relaxed and above all in a tight playing mood and  they struck hard.  It could be seen and felt that he whole six-piece truly enjoyed performing after a long break, even though they had to pull through six gigs.

The audience definitely enjoyed every second of the gig. The 60-minute set was the return back in time to the ’90s to enjoy tons of the classic songs of Amorphis from that era.

It was a pleasure to hear songs from the past that came nearly 30 years ago despite the short time. It would have been great to more songs from that era, but…. Amorphis has started working on new songs and will arrive at the studio within the next year, at least keep our fingers crossed in the hope of having the new album out by the end of 2021.