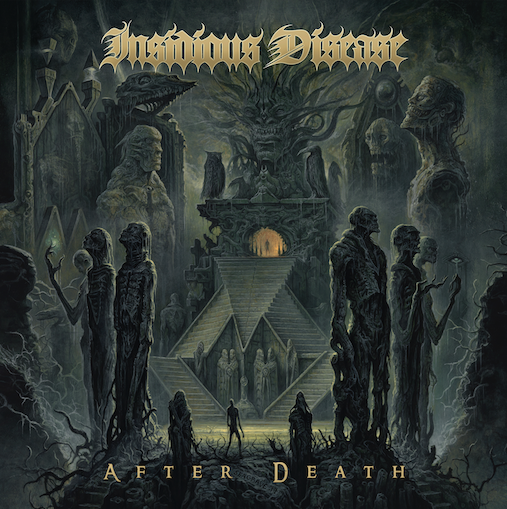 Norwegian death metal horde INSIDIOUS DISEASE, featuring current/former members from DIMMU BORGIR, MORGOTH, NILE, SUSPERIA and NAPALM DEATH, have announced their first album in a decade, “After Death,” will be released on October 30th with Nuclear Blast. Pre-orders are available now and the band has just unleashed a lyric video for a skull-crushing new track titled “Betrayer.”

WATCH THE LYRIC VIDEO FOR “BETRAYER”:

Commenting on the new track, vocalist Marc Grewe says, “‘Betrayer’ kicks in straight away and has a Quite remarkable hookline and a riffing that kicks you right into the balls. We can’t wait to play that song live again, which we did already a couple of times, and even if fans didn’t know the song yet, it always got a great response and people freaked/moshed out to it! Lyrically, it deals with stuff everybody has experienced: Getting fucked over/ betrayed by people you actually once trusted/loved to the fullest ..this can be girlfriends/boyfriends, bandmates, friends or even family… It was a good cathartic event for me when writing these lyrics…from That feeling of total disappointment into anger and finally to expressing it via a song, that channeled all those negativity into something positive!”

Earlier this year the band announced the record’s impending arrival with the vicious single “Enforcers of the Plague.” Watch the visualizer here: youtu.be/HuU53De0MGs

Sonically inducing a depraved and morbid condition of the mind, INSIDIOUS DISEASE returns this fall to present their second full length album. Freshly signed to Nuclear Blast Records, the band convenes to create a modern venture into classic death metal. Still in the early stages of existence with only their debut album “Shadowcast” (2010) preceding, INSIDIOUS DISEASE are ripe with a hellish energy that seeks to sear its way across the universe of heavy metal. “It’s not supposed to be re-inventing the wheel or anything, it’s just about finding a good groove that we feel comfortable with,” explains guitarist Silenoz.

Pre-order your copy of “After Death” in the format of your choice here: www.nuclearblast.com/insidiousdisease-ad

Pre-save the album on Spotify, Apple Music and Deezer: nblast.de/InsidiousDiseasePreS