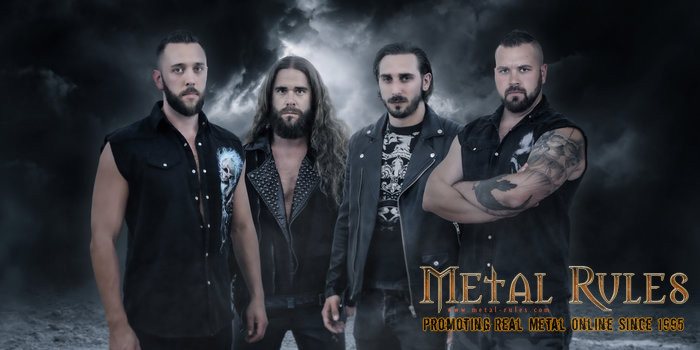 Hey, and thank you for your time! Please state your name and position in the band.

You’ve just released your fourth studio album “Sorrows” via Scarlet Records. How does “Sorrows” compare to your past work musically and thematically?

After releasing Legend of The Starborn, Anders and myself started to discuss the following album and decided that we wanted to change our sound a bit. For a lot of power metal bands that means playing slower and heavier but we wanted to keep the VEONITY-soul. That meant that we started to write songs with lots of bass drum and huge choruses, but add also a little bit more symphonic and progressive touches which were something new for us.

Prior to the new album, VEONITY has stories winding through their music; creating concept albums that follow a narrative thread. With “Sorrows,” there are common themes, but the story has been dropped. Was this a conscious choice or did the album just fall into place without the need for a narrative?

We both decided that the concept saga had come to an end, I mean the hero of Legend of The Starborn dies in the story and we thought that it was no idea to bring him back to life for a new adventure. Not now anyway, haha. In one way you could say that Sorrows is a conceptual album in that way that it deals with themes of grief and pain. On Sorrows both Anders and I, who write the songs, decided the overarching themes of the songs and wrote the lyrics in the feeling of the music.

Under normal circumstances, VEONITY would most likely be celebrating the new album release with a live show (or several), but with the onset of Covid-19, what will you be doing instead?

Covid-19 has changed the world in so many ways and the music industry suffers a lot these days since there are no touring or not even shows around. I really hope that there will be a cure soon and that things can start moving back to normal. We discussed the possibility of a live stream but since I moved to the Caribbean last year and pretty much quarantined, it seems impossible at the moment.

When did you first start getting into music and know you wanted to join a band? What bands inspired you to create and perform music?

Do you remember that booklet picture from “Keeper of The Seven Keys II” with the guys, a pumpkin, and just tremendous amounts of hair? That is one of the reasons I had wanted to form a band, haha.

How would you describe the music of VEONITY to someone who has never heard it?

Fast, catchy, and melodic power metal with some light touches of progressive and symphonic elements. And of course memorable choruses with choir vocals all covered up nicely in a huge amount of double bass drum.

Who does your artwork? Is there anyone you would like to collaborate with, be it an artist/photographer, another musician or producer?

Since our second album Into the Void we have worked with a Swedish guy called Thomas Homstrand (Homstrand Design). We love the work he has been doing for us and every time I meet with him to describe our new ideas for artwork or other design stuff he not only understand exactly my vision of what we are aiming for but also makes it even better than we imagined. I think if I would choose someone to work with it would more be on the music side of it and I have always wanted to work with the producer Sasha Paeth. He has really contributed a lot to the power metal scene with his work with bands like Avantasia, Angra, Rhapsody of Fire, etc.

What is the procedure for VEONITY of producing a new album/EP? Do you have a set way of doing things?

Over the years we have developed a nice working flow. It usually starts with Anders and myself discussing the theme of the album, in which direction the sound and the lyrics should go. After that, we write the songs and polish the lyrics. When it’s done it’s time to practice and to add some new ideas which lead to the final song. When all songs are done we head for the studio to record.

You guys have toured all over the world. What has been your favourite gig to date and why, and who would be your ideal tour buddies?

Without a doubt, I would say that the show we did with Powerwolf in Moscow was one of the best. The arena was packed with people and the Russian audience really know how to cheer, sing along, and support the band which is playing. The atmosphere was just perfect. The ideal tour buddies are people in a band who know how to have fun and work together to get the best show possible.

Do you have a favourite track from the album? If so, why, and will you intend to play it live when the time comes?

I think that “Where Our Memories Used to Grow” is my favourite on Sorrows. It is sort of a mixture between the old and the new sound and the duet with Anders and Jonas Heidgert (Dragonland) is magic. And who knows, it might come a time when we can perform that sound live ;).

Who would you say is your number one musical hero and why?

No single person has influenced me as much as Kai Hansen and especially with his performance in Gamma Ray. It was the song “Beyond the Black Hole” that got me into power metal.

Is it difficult balancing out being in a band, being away from your friends and family, with your home lives?

Being in a band takes more time than I thought it would. That means a lot of time away from family and friends as you say. Not only while touring and recording but also songwriting and practicing takes time. Luckily we have massive support from both friends and family. I think it would be pretty difficult otherwise.

What is the music scene like where you are based in Scandinavia? Any local bands the world should know about?

Sweden has a strong music scene in that way that a lot of bands and music comes from Sweden. I mean, you could say that Hammerfall or In Flames are local bands since they come from a town just 60 km away from where I live! But unfortunately, I think that the live scene in Sweden has more or less died. No one goes to shows and there are almost no rock clubs left that have live music which I find to be really sad.

What is it like touring? Do you all get on all of the time? Or do you have times you need space from each other?

If you go on tour with a tour bus I would say that personal space is a luxury thing! There are constantly people around and when you hit the club there are people there too of course. However, I actually like that because you get to meet a lot of interesting people while touring.

What are your views on bands who give away their music free on social media? Do you think this is a good beneficial marketing idea, or should fans be paying to purchase tracks?

The industry has changed so much since the 90’s when CD sales were a big income for the bands. Now music is free on Spotify for almost everyone which really makes it more difficult for bands to survive on their music. I think people have gotten used to having music around for free and takes it more or less for granted instead of realizing that if you buy a record from a band you like you actually support them in the creating of new music.

What genres of music do you like to listen to personally? Any new bands that have caught your attention recently?

Can I be honest? I actually only listen to Power Metal. And obviously I would say that the new band Majestica with Tommy Johansson (the guitarist from Sabaton) is a really great band. Tommy is also a friend of ours and his songwriting, guitar play and singing is just fantastic.

If you were stranded on a desert island and were allowed three albums along with three general things, which would you pick and why?

Lighter, knife, and Fishing hook accompanied by “Somewhere Out In Space”, “Symphony of the Enchanted Lands” and “The Metal Opera, part I”.

What do you like to do outside of music? Any hobbies?

I am a really keen fly fisherman and I spend most of my time in the summer months to travel around and flyfish.

What are your plans for the rest of the year, given that Covid-19 has halted any global touring plans for the foreseeable future?

The way the world is at the moment really makes it a perfect time to write a lot of songs, If the situation doesn’t get better at least we could always record a new album. Or two, haha!

Thank you for your time, is there anything you would like to say to our readers?

It was cool chatting with you. I think my final words will be something like “keep the flame of power metal forever burning!”