Inspiration can come from a number of unique sources. The concept behind this interview series was developed over time but recently crystallized in my mind. As the owner of a large library I’ve often pondered about the nature of collecting Heavy Metal music (Cassettes, vinyl, CD’s, memorabilia etc) and how and why people accumulate Metal ‘stuff’.  In 2017,  Martin Popoff wrote a book called METAL COLLECTORS which I read, thoroughly enjoyed and reviewed. It occurred to me that there are lots of people out there with pretty massive Metal collections so I decided I wanted to chat to some of them and interview them for the site.

My concept is to, over time ask people with some pretty impressive, monster collections the same series of questions. I’m basically stealing that idea of METAL COLLECTORS (Sorry Martin!) and expanding into an interview series. Lastly, the name for this series was spawned by a gentleman by the name of Ray Wawrzyniak. He appeared in the Rush documentary TIME STAND STILL.  Ray is a Rush super-fan and in one particularly charming scene in the film, the genial and friendly (but clearly obsessed) Ray shows off one piece of his Rush collection and refers to it with barely hidden glee as ‘Spectacularly Majestic’. It was in fact ‘just’ an old piece of paper, (a Rush ad from a magazine from 1979) but that phrase alone and his enthusiasm I feel embodies the spirit of Metal collecting, because I suspect that many Metal collectors have those same moments. Check out the 1:30 minute mark of the video below.

If you, or know someone you know, has a monster Metal collection (in the 1000+ range) please feel free to get them in touch with me!

Tell us how you started collecting Metal!  When did you start?

Well it was when I was playing NFS Underground that I first got into metal music, the first track I ever heard was ‘The Only’ by Static-X (god I miss Wayne Static), this lead me to buying my first ever metal album “Shadow Zone”. Before getting into metal music I was into pop and rock, from ABBA to 90’s pop and the BeeGees to The Rasmus and Queen; I still listen to them… anyway deviating here.

I guess I started through the back door rather than the conventional way of going from pop to rock to metal you know? Most will go from Hard Rock into Heavy Metal but alas Industrial Metal it was. It was then during my time at school where I would at lunch time head into the library and use the computers to download metal music samples from band websites and use Wikipedia to look up more metal bands; learning about the genres along the way. Heck I even did this at homework club before I got booted haha, I grovelled and was reinstated back.

My collection stemmed from that really, I think my 2nd album was “Synthetic Generation” by Deathstars and then “Fallen” by Evanescence. I was 12 going on 13 at the time and like most family  members will think, ‘it’s a phase’… oh how I proved them wrong haha. I then went further down the Industrial Gothic Metal route; I was a goth at secondary school as well as listening to metal… so out came Deadstar Assembly, Gothminister, Neon:Synthesis, Oomph!, Rammstein… and in the more general metal side was Exilia, Unleashed, Tristwood, Marilyn Manson, Slipknot, I could go on…

Fastforward and through my music journalism hobby of going on 11 years, I’ve expanded my collection considerably… genre wise, country-wise and format-wise. How big is your collection?

It’s changing all the time but I think it’s more about increasing than depleting; after all you hear a  copius amount of bands in music journalism and the irony is, you can’t get all the music in physical format.

As above, yet to build a digital collection up yet as I prefer to have the physical copy, you don’t get the same feeling of receiving a CD from say Kazakhstan as you would downloading it you know? I may be a millenial; who stereotypically is supposed to be embracing technology like a tech junkie who camps outside stores for the new iPhone, but I believe in the mantra of ‘the old ways are the best ways’ and this in music is 101% true for me.

How do you count your collection?  For example.  If you have say for example, multiple copies of KISS-Destroyer on the following media; Vinyl, 8-Track, Cassette, CD, and digital format do you count that as five items or just 1 item?

Good question, I never really thought about it to be honest, if I were to I would say that I would count each release as one but state that I have it on CD or vinyl, etc. Speaking of which, I only really tend to buy the vinyl version if it’s an album I really like or it’s from a band from a very obscure country e.g. I own an LP by Oriksha Shakpana, a Black Metal project from Jamaica; love the music though. Otherwise if it’s a coloured vinyl (I go weak at the knees here), then I’ll justify if I like the album that much, if so I’ll buy it; price considered.

When you collect certain bands, do you buy all of their stuff such as Live albums, EP’s, Compilations, box-sets etc?

I’ll buy studio albums, live albums, compilations, EP’s and maybe a boxset if I think it’s easy to keep, or something I feel carries value in it’s price – the one I love the most is “Descent Into Genocide” by the English Black Metal band Eastern Front; it has a CD, patch, T-shirt, a few knick knacks from one of the music video including rope that was used.  I will even contemplate bootlegs, I own two – Cradle of Filth, live show recorded in Poland and a Children of Bodom one, show recorded live in South Korea. I don’t buy singles anymore.

How do you organize your collection if at all;  by genre, Chronologically? Alphabetically?

Generally I don’t have any classification system going, not yet anyway as stated in a previous question, it’s forever expanding and I fear that if I was to buy 1 CD and it wouldn’t fit, I’d have to move the entire collection for that 1 CD… so this is why I stick to a randomized but documented order.

Do you insure your collection?

Nope, maybe I should, not sure to be fair haha…

How do you store your collection?

I use the nifty boxes known as ‘Skubb’ (Swedish speakers will know), they’re from Ikea and are a black zipped nylon container; can on average get nearly 300 CD’s in a box. I have spare cases should some crack.

What is your preferred genre(s)?  Do you have a genre break down of your collection?   For example  15% Death Metal,  25% Black Metal etc?

I love all metal genres, so it would be difficult to select 1 preferred genre. But I would say I have the biggest soft spot for Folk Metal, Symphonic Metal, Gothic Metal, Melodic Death Metal and metal genres where bands create unique sounds / themes e.g. Alestorm’s ‘Pirate Metal’, Rudra’s ‘Vedic Metal’ and so forth. Nope no genre breakdown; too many genres to even contemplate this haha.

Do you sell and trade or strictly buy?

I only sell the CD’s that I bought, the ones I have been sent for review by unsigned bands I have either kept or given to metalheads I know who would appreciate the cds more. Promo CD’s are either kept or destroyed for legal reasons; yeah I know some people sell on promo CDs but I don’t entertain it. Of course if the album is sent for review digitally and I love it, I will see if it’s available on CD, otherwise I delete it.

What is your preferred format?

CD. Vinyl is great for sure but takes up more space, as said it’s reserved for the albums I most enjoy, or from very foreign bands.

How do your track your collection?  Do you use a spreadsheet or one of the on-line services or even a hand-written list?

I use Discogs and an ExCel document to keep on top of my collection, it’s so that I don’t buy the same release twice; we’ve all been there, I have done it before.

What is your most valuable piece? (not in terms of sentimental value, but in actual terms of resale value on the open market. ie. Goldmine etc. )

This is a hard question to answer. In all honesty I don’t have answer. I would be lying to you if I said I did.

What is your rarest item in your collection?

Ah! Now you’re talking! Allow me to spill out verbose verbiage. As a specialist in global metal music I will list the rarest items I have in my collection (sorry to abuse the question):

“Wasteland” by Surrender The Thief (Metalcore from Guam) – CD

“Phantoms Of Our Ruin” & “Corruptors” by Nightmare A.D. (Thrash Metal from Cambodia) – CD

I could go on haha but this will do. What is the most you have paid for an item?

£70. Well ok haha this was for a CD and t-shirt to be sent from Botswana.

T-shirts – I have a huge amount, going on 100 I’d say, again I’ll buy a t-shirt from a band I really like, so I have t-shirts from bands in Bangladesh, Spain, Egypt, India, etc.  Actually whenever I get post from abroad, I’ll keep the stamp – can this be metal?

What is the one item you have been searching for that you cannot seem to find?

CD’s from bands in Angola and Madagascar… although I am working on this. Why do you collect Metal music?

It really is down to my fascination in global metal music and the unrelenting desire to support bands. In addition to that it’s the fact I feel metal music is a genre that speaks out to me, it’s a genre that once you’re in, you’re in for a long time. Oh and I love chatting to people from aroud the world.

In a morbid and Metal question,  what do you plan to do with your collection when you die?

Given my collection is substantially global, I would love to see them in a metal museum of some kind when I die (trying to keep it light as best as sorry). I feel that some of the CDs are a vital part of metal history – especially bands like Black Knight Symphonia, Arka’n, Orisha Shakpana, Conrad, bands who helped create and are leading their scenes. Stay metal, support the bands worldwide, check out the scenes in the far flung countries and embrace the global metal apocalypse. 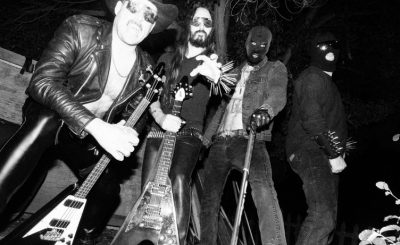 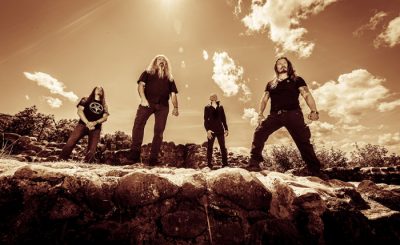 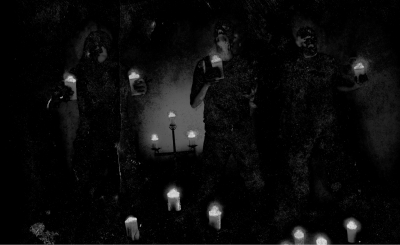 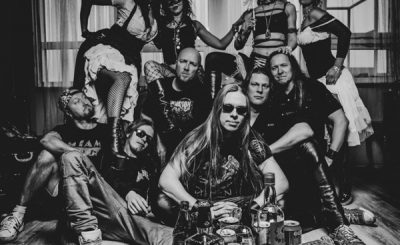 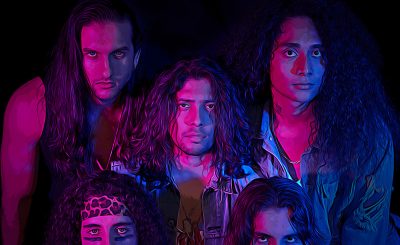 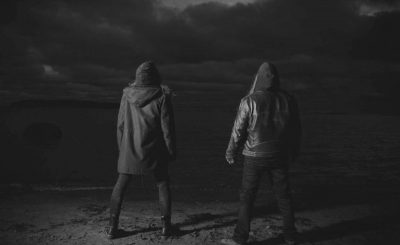