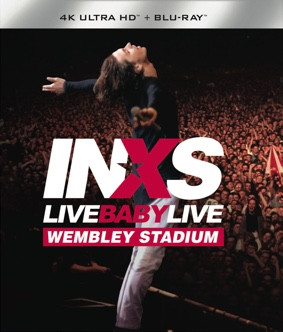 29 years ago today, INXS performed a career defining show at London’s Wembley Stadium. Live Baby Live, the recently restored 4K film of that performance, has impacted on charts around the world and brought this jaw-dropping live experience to a whole new generation of fans.

The home entertainment release (including 4K download and 4K UHD blu-ray, which has over 20 times the resolution of the original release) has stormed the music film charts, garnering #1 chart impacts in Australia, Germany and Spain, #2 in the UK and France, #3 in the US, and numerous top 10 placings in other major markets.

The original film was scanned and restored into 4K, and remixed and remastered by Giles Martin and Sam Okell whose Dolby Atmos mix was experienced by fans in over 1,000 cinemas around the world last year.

Back in July 1991, only days before INXS were due to take to the stage at the original Wembley Stadium, their then, long-time International Manager, CM Murphy, devised an audacious plan to film this landmark event. Director David Mallet accepted, and along with 16 cameras, a helicopter and an insistence to shoot on 35mm film, INXS’s most revered performance was forever committed to film.

CM Murphy, Chairman of Petrol Records said “I would love to put a room full of today’s musicians, bands and artists in front of that gig – there would be a lot of wake-up calls. The era before phones where the band just had to get up and give it their all – there was no bullshit”.

Alice Webb, CEO, Eagle Rock Entertainment said: “This was always a special concert and the work by Eagle to remaster it into 4K takes it to another level – we knew it was special from the outset and are delighted the fans feel the same”.

INXS are named as Australia’s Biggest Selling Artist of the Decade by ARIA, and have sold over 50 million records worldwide. They have performed over 4,000 live shows to over 25 million people in almost 50 countries.

What the fans are saying…
“At last, it looks and sounds like how I remember it”
“This is an absolute epic restoration, both visually and musically!”
“Mindblown! Amazing how much was hidden inside the 35mm film for almost 30 years”
“The picture quality is absolute stunning…sooooo much better than the old DVD”
“Wow! One of the best shows ever deserved to be released on 4K. Thanks Eagle Rock”
“My children thought the concert had been filmed in 2020. At a time when the world is faced with some serious challenges, it was a welcome respite to step into a time machine and travel back to 1991. Seeing all of the INXS fans packed into Wembley Stadium to celebrate their rock heroes was awesome. I truly wonder if those days will ever return again! Congratulations on the restored film and for bringing INXS and the unforgettable Michael Hutchence back to us for a visit. Perhaps it will inspire a new generation of fans!”