Toronto’s Plague Weaver released a new EP “Through The Sulphur Eyes” in January 2020 and now has a music video out for the track ‘The Traveller’.

Aiming to create black metal with a sickening atmosphere, the solo project of RM offers up the bleak video, which compliments the black metal it is set to, characterized by pounding, slow, dissonant riffs. Creator RM explains the EP as a whole:

“The new EP is a continuation of work that began on our self-titled debut. It’s still black metal with elements of doom metal, but with a little bit of a different approach – more spoken words, more atmosphere and a guest solo in ‘Unchained, recorded by Derryl Vi.”

Follow up on the debut, self-titled release from last year, “Through The Sulphur Eyes” is blackened doom mixed with faster, melodic parts and fans will appreciate the consistency.

There is more in the works from Plague Weaver, a full-length release has been hinted at, and the establishment of a live lineup for performances.

For fans of Rotting Christ, Varathron, old Samael, Triptykon, and Dissection, the album is available now on Plagueweaver.bandcamp.com, Spotify and iTunes. 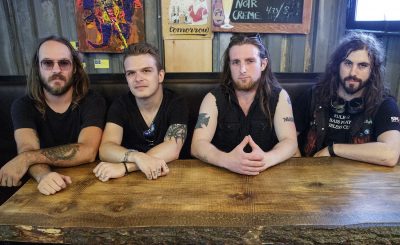