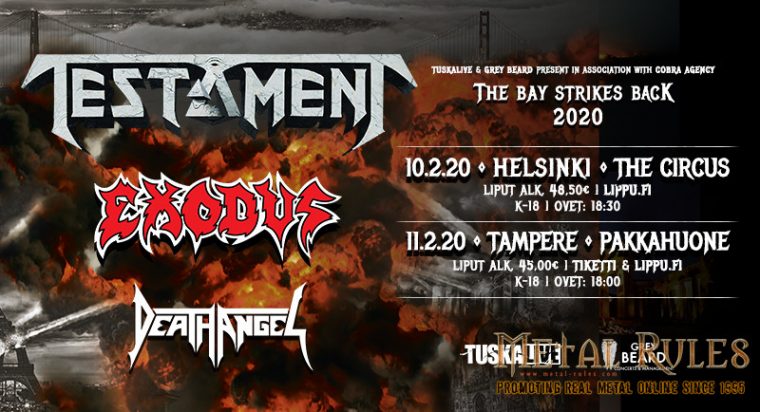 When three legendary Bay Area thrash metal groups embarked on the tour together, it is evident that the concert venues would be packed and sold out. This kind of tour has waited for years and decades in Finland until it became a reality in 2020. All the three bands, Death Angel-Exodus-Testament, have the loyal and even devoted following among the metal fans around the globe. Metal-Rules.Com Finnish Team was present at both the shows to see how bands copied on stage after the rough ferry trip.

It’s hard to believe that it’s been already sixteen years we last time witnessed San Francisco’s energetic Death Angel’s previous time in this city. The show was at the Tuska Festival, which is a big metal outdoor festival organized in the heart of Helsinki. However, time flies and a lot of things have happened within the band after that. Death Angel has gone through several line-up changes, but the band has also released several high-quality thrash metal albums. The latest, HUMANICIDE (2019), received a well-deserved Grammy nomination, and it has definitely helped the band to re-gain its name in the eyes of the bigger audiences.

Death Angel’s showtime was really early. The original schedule said 07:15 PM, but fortunately, the time had been moved forward a bit. The venue doors had been opened at 06:30 PM, so a lot of people were still stuck at the checkroom at that time. Thanks to the little delay, most people made it into the venue before the band took the stage at 07:45 PM. Death Angel’s stage looked as stripped as possible. There was no backdrop flag in the wall or even band logos on bass drums, no nothing. But as soon as the band headed on stage and kicked things off with the obvious choice, “Humanicide,” the place was on fire. The early THE ULTRA-VIOLENCE album classic “Voracious Soul” was played next, and the band’s energy level just get better. Vocalist Mark Osegueda jumped and ran around the stage like a wild animal, and addressed the crowd for the first time after “The Dream Calls for Blood,” and introduced one of the newer number “The Moth.” Osegueda fist-bumped with many of people in the audience and commanded the moshpit. The crowd responded it was great to watch moshpits during “Seemingly Endless Time,” which is a timeless classic from the ACT III album era.

I saw Death Angel’s show at Swedenrock Festival last summer, so I knew what to expect. Their insane stage presence was enjoyable to follow. Osegueda leads the show, but the guitarist duo of Rob Cavestany and Ted Aquilera were both great showmen too. And one can only wonder how they are capable of playing such great and sometimes complicated riffs after another when they’re headbanging like maniacs through the whole set. Bassist Damian Sisson, who looks like the long lost brother of Cliff Burton (RIP), took the things a lot calmer. However, together with the powerhouse drummer Will Carroll, they were a super tight rhythm section. To sum this gig, my expectations for the Death Angel show were very high, but I’m glad to say they were quickly surpassed. When the band closed their set with a medley of “The Ultra-Violence” and “Thrown to the Wolves,” I only had two things in my mind. I wanted to hear more, Death Angel! Secondly, I think that the band deserves a higher position on the thrash metal rankings. They might be a bit younger than their tour colleagues but were definitely the most hungry and energetic band tonight. The band’s short setlist was a great mix of new and old material, without losing the momentum at any point. Hopefully, the Grammy nomination now helps the band achieve the respect they deserve. Death Angel’s headline tour would be amazing to see, since we have never seen any in Finland, yet.

Holt’s duties in Slayer have mostly occupied the axeman’s time during the past nine years. Therefore the band has toured with the Heathen/Prototype guitarist Kragen Lum helping the band out. Regarding the on-going tour Bay Area Strikes back that has been successful as gigs have been sold out, and the old school thrash metal fans have got the real dream-come-true line-up. When arriving at Finland, the whole clan of the legendary thrash veterans of Exodus appeared to be quite dead tired. The rough ferry trip from Stockholm to Finland had made a couple of Exodus guys so sick that they had to rest the whole day before getting on the stage. Testament’s gear got stuck in Stockholm as the ferry was canceled because of the raging storm in the sea, all the settings of instruments and soundcheck had to be well planned and re-arranged. Despite the challenging situation and rough night, the five-piece hit the stage and unleashed the friendly violent thrash metal. The 60-minute set consisted of the new and old stuff. “Body Harvest” was the game opener and was immediately followed by another newer song, “Blood In, Blood Out.” Exodus is always destined to play a handful of songs off the debut album BONDED BY BLOOD being an iconic thrash metal album released back in the heyday. So did they now; “Deliver Us To Evil,” “Bonded By Blood” and finally “Strike Of The Beast.” “Toxic Waltz” was the mandatory one on the set to make the floor boil by insane looking circle pits. The band wasn’t in the finest and vicious strike on the stage, but they handled the gig with the long time routine and experience. Altus and Holt’s dual guitar playing was fine, but Altus’ seasick in the previous night slowed the man’s headbanging and tightness. Souza made some eccentric mistakes with the lyrics of” Dethamphetamine.”

When the gig in Helsinki didn’t go as planned, and the band was definitely struggling through the set. The sleep and ease made things change quite tremendously. Exodus’ second gig in Tampere showed a newborn band.  The playing was tight and in general, the whole five-piece appeared to be vital and relaxed on the stage.  Souza didn’t make any mistakes in the lyrics and speeches. Instead, he thrashed thru the 60-minute set.  Tom Hunting’s drumming was flexible with the dynamic flow. Exodus came and conquered at the second show. Even though the latest Exodus album BLOOD IN BLOOD OUT came out in 2014, the bands working on the follow-up and is going to spend the whole summer in the studio and their rehearsal chamber. Souza promised the new album would be out soon, and the band will return to Finland. Welcome

Body Harvest
Blood In, Blood Out
Deliver Us to Evil
Fabulous Disaster
Deathamphetamine
Blacklist
Bonded by Blood
The Toxic Waltz
Strike of the Beast

Testament suffered a lot from the rough and wild ferry trip. The truck with all the gear and other stuff got stuck in Stockholm as a ferry was canceled because of the insane, dangerous storm. Instead, all the bands managed to get on the ferry that left to Helsinki. As a result, Testament had to borrow all the instruments from other bands, Exodus and Death Angel, and perform in ordinary clothes. The whole setlist had to be fixed and renewed as some of the newer songs couldn’t be carried out and played with the borrowed guitarists and bass because of the tune. Testament surprised the audience at the Helsinki show by doing a pure old school set by focusing the material of the first two albums.  The playing time had also been shortened to 60 minutes from 90 minutes. Testament offered one kind and unforgettable show to the Finnish old thrash metal fans.  Even though the situation was odd and bizarre for the band, but the audience thanked and arranged one hell of pits on the floor.

Testament got all the gear and other stage stuff for the second show. Besides, the whole Testament crew had rested and were prepared for the show better. When the setlist had been fixed due to challenging circumstances for the Helsinki show, the standard setlist had been brought back with the full playing time for the gig of Tampere.  Testament has usually focused on playing the classic songs, but the whole setlist had been renewed. There were songs like “Greenhouse Effect” and some newer ones such as “Last Stand for Independence,” Throne of Thorns.” That was welcomed reform. The Bay Area thrash legends thrashed a 90 minute set with the routine grip. The sounds had eccentric distortion, and Bily’s voice kind of swallowed and got over by the guitars. He seemed to have problems with the ear monitors as occasionally fixing it.

The setlist in Helsinki

The setlist in Tampere